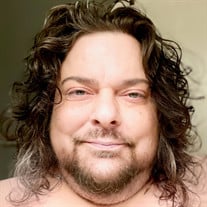 Paul Harper-Shirk died October 8th, 2021 in his home in Gainesville Florida of heart failure. He would have been 46 on October 9th. Paul was born in Iowa City, IA on October 9th, 1975 to Paul Harper and Carol Case. He spent many of his early years in Kirksville, MO and Sundance, WY, but returned to Iowa City for junior high and high school. Paul is an alumni of CEC, an alternative high school where much of who he became was formed. At age 17 Paul found himself homeless due to a difficult divorce situation. His mentors at CEC and advocates at United Action for Youth guided him through the difficult process of emancipation, securing him housing and supporting him to finish his education while working full time. Despite his difficult beginnings he managed to become a well loved towny and friend of many. He was able to study computer science at Kirkwood CC and later put himself through LaJames International. He would become a beloved hair dresser known for his flamboyant style and quick wit. He described his work as “hairapy” because he wanted people to feel they were just as beautiful inside as their hair color was on the outside. He tried to inspire people to love themselves and others. To take his love of his career and clients further he would return to LaJames as a teacher to give others the gift he got when he was a student in need of guidance and inspiration. In 2001 Paul connected with the love of his life and occasional partner in crime Jeffrey Harper-Shirk over a dinner to protest being single on Valentine’s Day or as Jeff called it “Glorified Rejection Day”. The spark was lit, they used the L-Word in the first week and married on May 1st, 2009. Over their time together they owned and managed a series of salon and spas, as well as taught. They enjoyed traveling to sunny climates, attending music festivals, snobbing it up at book signings of their favorite authors (Paul’s secret love was for “Chick Lit: Paranormal Cozy Mysteries”, but I didn’t tell you that. Officially he liked horror novels.) going to fantasy conventions, playing roleplaying games and cosplay, French and Chinese cooking and spending time entertaining their many friends and family members. He is survived by his husband Jeffrey Harper-Shirk, his sister Paula Mackey, his nephew Joey Shirk and niece Katie Shirk. He was a beloved husband, brother, uncle, friend, teacher, hair dresser and merry trickster. He touched every life he encountered and will be missed. A memorial is being held Sunday, October 31st at from 4:30 to 7:00 p.m. at Gay and Ciha Funeral home in Iowa City. For more information please visit gayandciha.com. In lieu of flowers please consider a donation to United Action for Youth, Iowa City, IA 319-338-7518, unitedactionforyouth.org .

Paul Harper-Shirk died October 8th, 2021 in his home in Gainesville Florida of heart failure. He would have been 46 on October 9th. Paul was born in Iowa City, IA on October 9th, 1975 to Paul Harper and Carol Case. He spent many of his early... View Obituary & Service Information

The family of Paul Harper-Shirk created this Life Tributes page to make it easy to share your memories.

Paul Harper-Shirk died October 8th, 2021 in his home in Gainesville...

Send flowers to the Harper-Shirk family.