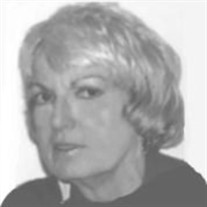 Patricia Elizabeth (Liz) Marvin Mulholland died on April 9, 2021 in Gainesville, FL due to a heart attack and complications from kidney disease. She avoided COVID-19 with careful isolation from public situations. Born to Maxie Hawthorne and Charles Terrel in Chicago on December 30, 1940, Liz was adopted by Kay and Edwin Marvin of West Hartford, CT. She was a graduate of Abbot Academy, Andover, MA and Briarcliff College, Briarcliff Manor, NY. Playing and loving golf and going to New York Yankees baseball games from an early age, she was interested watching any professional golf and had her Yankees ball cap on the table next to her chair ready for the baseball season. Liz also loved to read with subscriptions to many magazines and played bridge with many of her friends. She was the author of “Surviving High Society” a memoir about her early years. Liz was a member of the Gainesville Junior League, the Gainesville Country Club and the Gainesville DAR, tracing her lineal descent through her natural Mother Maxie Hawthorne. She leaves a loving husband James, a step-son, Christopher, of Winchester, VA, a brother, Jonathan Seidel, sister-in-law Carol Haskell, of Oakland, CA, two nephews, Michael Seidel of Oakland, CA and David Seidel of San Francisco, CA, brother-in-law Michael Mulholland of Danville, KY. In addition to the aforementioned family, Liz leaves an email friend, Noreen Cullen of Glastonbury, CT and numerous bridge and book club friends in the Gainesville area. Interment will be in the Caine-Marvin Mausoleum in Cedar Hill Cemetery, Hartford, CT at a later date.

Patricia Elizabeth (Liz) Marvin Mulholland died on April 9, 2021 in Gainesville, FL due to a heart attack and complications from kidney disease. She avoided COVID-19 with careful isolation from public situations. Born to Maxie Hawthorne and... View Obituary & Service Information

The family of Patricia Mulholland created this Life Tributes page to make it easy to share your memories.

Send flowers to the Mulholland family.