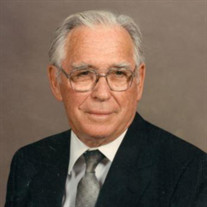 Oliver Everett Boals was born on October 9, 1913 in LaCrosse, Florida to a farm family, Noby Strobar and Sudie Jane Cason Boals. He was known as “Daddy” or “Pappy” by his family and by many of his friends. Through the years he has been known as “Preacher”. On October 16, 2020 he answered God’s call and quietly and peacefully moved from Ayers Rehabilitation Home to heaven, a move he had been ready for and wanted for a long time. He was preceded in death by his parents, his wife of 72 years Shirley Vesta Keen, his second wife Velvehree Griffis, brother Ronald, and sisters Juanita and Marjorie. He is survived by daughters Lydia Springs and Carol (Kenneth) Bryant, son Donald E. Boal’s, sister Emily Jeffcoat, three grandsons, two granddaughters, nine great-grandchildren ,three great-great grandchildren, and a host of nieces and nephews. Brother Boal’s said he knew he was destined to be a preacher since age four when he was sitting in a little country church service with his parents. He remembers the sermon and the text, “Nevertheless at thy word I will let down the net” (Luke 5:5). It was not until he was seventeen he said “Whoa” to the mule he was plowing, fell to his knees in the plowed dirt, and gave his heart to the Lord and committed to do what God wanted him to do. He has been faithful to this commitment for ninety years. He was last able to preach at age 105. Bro. Boal’s was baptized and ordained to preach at Jonesville Baptist Church, a church he pastored on two occasions. First pastorate was in 1931 for Eden Baptist Church, Hawthorne, where he preached some of his last sermons at their Homecoming days. His last active Pastorate was Riverside Baptist Church, Branford, where he served after being 100. In the interim he has served sixteen different churches all in Florida. He has been active in service to the Florida Baptist Convention and in the Associations where he pastored including two terms on the State Board of Missions and numerous offices and committees. During his ministry he has held revivals throughout Florida, in Georgia, South Carolina, Alabama, Texas, Pennsylvania, South Dakota, and South Africa. Bro Boal’s always said preaching was his job, but he still needed to make a living for his family, and he did, such as a butcher and grocer, he worked in a sawmill and as a cattleman. Bro. Boal’s philosophy of ministry was “preach the word and love the people”. This is evidenced by his throngs of friends which he often referred to as his “children”. One of these “children” laughingly remarked, “The preacher baptized me and married me and was to preach my funeral and now he has let me down”. He has been blessed by the outpouring of love, generosity, and kindness shown by his family and friends and you can be sure that he has loved and cherished each of you. These are the Churches Bro. Boal’s has pastored. Eden (Hawthorne), Elim (Ft. White), Island Grove, Jonesville (Newberry), Jones Road (Jacksonville), Lake Placid First, MacClenny First , North Pleasant Grove (LaCrosse), Orange Lake, Pine Grove (Gainesville), Riverside (Branford) ), Union (Newberry), Woodlawn, (Hawthorne), Woodstock Park (Jacksonville). The family will receive friends Wednesday, October 21, 2020 from 5:30 to 7:30 p.m. WILLIAMS-THOMAS FUNERAL HOME WESTAREA, 823 N.W. 143rd Street Newberry. A celebration of Bro. Boal’s life will be held at 11:00 a.m. on October 22, 2020 at the funeral home with Dr. Gary Crawford and Rev. Jim Blevins, officiating. Burial will follow in Jonesville Baptist Church Cemetery, 17745 S.W. 15th Ave. Newberry.

The family of Bro. O. E. Boals created this Life Tributes page to make it easy to share your memories.

Send flowers to the Boals family.