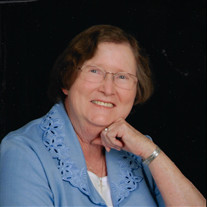 Norma Jean (Moore) Wood, age 79 of Gainesville, FL died on Wednesday, May 27, 2020 after a brave battle with dementia. Norma was a loving wife, mother, grandmother and friend. Norma was born on April 16, 1941 in Memphis, TN to Ulus and Louvre Moore. Norma was raised on the family farm in Marianna, Arkansas graduating from TA Futrall High School in 1959 in Marianna as class valedictorian. Norma graduated from Arkansas State University in 1963 with a degree in Math Education and was in the Who’s Who of American Colleges and Universities. While at Arkansas State University, Norma met and married her husband, Jack and was a supportive wife during his career in the Navy. In addition to her degree from Arkansas State University, Norma received her master’s in education from Nova Southeastern University. Norma was a lifelong high school math teacher retiring from teaching at Eastside High School in 2000. While at Eastside, Norma taught in the International Baccalaureate program and was the head of the math department. Norma was a founding member of Grace United Methodist Church and was active in Beta Sigma Phi and the Gainesville Woman’s Club. Norma loved to travel around the world and made many friends on her trips. Norma was an avid Gator fan and was a member of the UF Tip Off Club, cheering for the Gator Basketball team for 30+ years. Norma is survived by her loving husband of 57 years, Jack B. Wood, daughter Brenda Schildberg of Fleming Island, FL, son Mark Wood (Victoria) of Wan Chi, Hong Kong, grandchildren, Michael, Stephen, Julia, Isobel and Amelia. Norma was predeceased in death by her parents Ulus and Louvre Moore and a son-in-law, Scott Schildberg. Due to the current pandemic situation, a private family graveside service will be held in Newnansville Cemetery, Alachua. A celebration of life service will be held at a later date. In lieu of flowers, donations may be made to the Gainesville Woman’s Club, 2809 West University Avenue, Gainesville, FL 32607.

Norma Jean (Moore) Wood, age 79 of Gainesville, FL died on Wednesday, May 27, 2020 after a brave battle with dementia. Norma was a loving wife, mother, grandmother and friend. Norma was born on April 16, 1941 in Memphis, TN to Ulus and Louvre... View Obituary & Service Information

The family of Norma Jean (Moore) Wood created this Life Tributes page to make it easy to share your memories.

Send flowers to the Wood family.