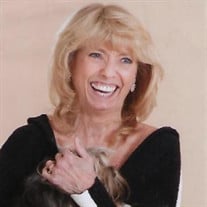 Gainesville- Nina Cameron, age 77, passed away unexpectedly on November 7, 2021, following complications from a surgery. Nina was born on May 30, 1944, in Gainesville, Florida, the daughter of William and Francis Kessler. Nina was a beloved wife, mother, and grandmother. She taught dance in Gainesville from 1969 until she passed. She was the owner of The Cameron Dancenter and the founding Artistic Director of The Danscompany of Gainesville, both established in 1983. Nina was a member of Florida Dance Masters and held many leadership positions, including president. She was a faculty member for the State Dance Association and a member of the Jazz Dance World Congress. Nina also was a dance teacher and choreographer for the Walt Disney World grand opening in 1971. In 2007 and in 2013, the City of Gainesville and Alachua County awarded her The Lifetime Achievement award, and declared a day in her name. Nina was honored in 2007 by Santa Fe College with the Woman of Distinction Award. Nina was a dedicated teacher and student of dance attending workshops all over the country each year. She was a brilliant choreographer, mentor, and inspiration to many. Nina was predeceased by her parents. She is survived by her loving and dedicated husband of 58 years, Dickie Cameron; her sons Rickie Cameron and his wife Liz of Canton, Georgia; Britton Cameron and his wife Tamara of Kingston Springs, Tennessee; three grandchildren, Chelsea Cameron, Kessler Cameron, and Kaleb Cameron; two sisters, Debbie Diggs and her husband Hal; Cindy Erlandson and her husband Paul; and a brother, William J. Kessler, Jr. and his wife Elizabeth. Nina will be missed as a wife, mother, grandmother, sister, friend to many, and pillar of the community. She touched thousands of lives with her teaching, artistry, and her passion and love of dance. Her legacy will live on through her children, grandchildren, The Dancenter, and Danscompany. A Service of Remembrance will be held at 1:00 p.m. on Saturday, November 20th at Phillips Center for the Performing Arts of Gainesville, 3201 Hull Rd, Gainesville, FL 32611. Rev. Myra Monroe Carr will officiate. Interment will follow at Evergreen Cemetery, 401 SE 21st Ave, Gainesville. The family appreciates flowers or donations can be made to the Scholarship Fund of the Cameron Dancenter or The Danscompany of Gainesville, 5003 NW 34th Blvd., Gainesville. A Celebration of Life will be held in the Spring.

Gainesville- Nina Cameron, age 77, passed away unexpectedly on November 7, 2021, following complications from a surgery. Nina was born on May 30, 1944, in Gainesville, Florida, the daughter of William and Francis Kessler. Nina... View Obituary & Service Information

The family of Nina Cameron created this Life Tributes page to make it easy to share your memories.

Send flowers to the Cameron family.