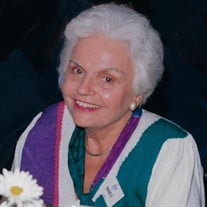 Nancy Hays Ross, age 89 of Gainesville, FL passed away peacefully on Thursday, February 27, 2020 at her home in Oak Hammock at the University of Florida. She was born August 1, 1930 in Waltham, Massachusetts to Josiah and Helen Hays. She enjoyed much of her childhood at the Academy of the Assumption boarding school near Boston, MA. She was very proud of her five year BSN degree from Boston College, as well as her master level studies in nursing. She will be greatly missed by family and friends for her love of laughter, thoughtfulness towards others, optimistic outlook, generous spirit, love for travel, and gratefulness for all of God’s blessings for her and her family. Nancy met her husband, John Joseph Ross, M.D., in Cleveland where she was working as a nurse and he was completing his fellowship in Pediatrics at Cleveland Metropolitan General Hospital. They married on May 21, 1960 in Waltham, Massachusetts. In 1965, Nancy and John moved to Gainesville, FL where they raised their three children and he worked at Shands Hospital at the University of Florida College of Medicine, where he ultimately served as Chief of Pediatric Neurology. Nancy lived in Gainesville for the past 55 years and was very supportive of and involved in numerous local organizations. Nancy was extremely involved in the Gainesville Catholic Community and became a founding member and supporter of multiple Catholic churches in Gainesville. Most recently, she was a member of Holy Faith Catholic Church and St. Augustine Catholic Church. She particularly enjoyed her volunteer work as a Eucharistic Minister for the sick – spending time each week bringing Holy Communion to the sick and homebound. In addition, Nancy was active with the UF Medical Guild, Florida Museum of Natural History, Gator Boosters, Angels of Mercy, and the tennis community of Gainesville during her child-raising years. Nancy also became an entrepreneur later in life, owning and managing a number of retail stores. She is survived by her three children, MaryAnn Ross Neill (Michael), John J. Ross II (Alexandra), and Edward H. Ross (Nancy); sisters, Jean Wilson, Antoinette Hays, Christine Malloy; brother, Wesley Hays; grandchildren, Caitlin, Mary Jo and John Neill, John “Jack” III , Sylvia, Paulina and Nicholas Ross, Edward II, Anna and Michael Ross; and a number of nieces, nephews, and cousins. Her husband John preceded her in death, as well as her brother Teddy Hays and parents, Josiah Hays and Helen Hays. The family will receive friends Friday, March 6, 2020 from 5:00 p.m. to 7:00 p.m. at WILLIAMS-THOMAS FUNERAL HOME WESTAREA, 823 NW 143rd Street, Newberry. A Mass of Christian Burial will be celebrated Saturday, March 7, 2020 at 10:00 a.m. at St. Augustine Catholic Church, 1738 W. University Ave. Gainesville, with Fr. David Ruchinski as celebrant. A reception will follow. In lieu of flowers, donations may be made to help fund The Ministry of Holy Communion in memory of Nancy Ross; checks may be made payable to St. Augustine Catholic Church (write Nancy Ross Fund on memo line), or make a one-time donation at https://catholicgators.org/give-general and mention the Nancy Ross Fund in the comments section.

Nancy Hays Ross, age 89 of Gainesville, FL passed away peacefully on Thursday, February 27, 2020 at her home in Oak Hammock at the University of Florida. She was born August 1, 1930 in Waltham, Massachusetts to Josiah and Helen Hays. She enjoyed... View Obituary & Service Information

The family of Nancy Hays Ross created this Life Tributes page to make it easy to share your memories.

Send flowers to the Ross family.