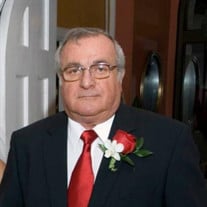 Mr. Michel Moukhtara, 77, a longtime resident of Gainesville, Florida, died Thursday, December 30, 2021, in the Shands Hospital at the University of Florida, following a short illness. Mr. Moukhtara was born in Zgharta, Lebanon on September 21, 1944, to the late Philip and Marie Moukhtara. He lived his early life in the West African nations of Senegal, Gambia, and Mauritania, before moving to the United States and Gainesville in the mid-1980s. Mr. Moukhtara was a residential land developer, developing neighborhoods around north-central Florida, including San Felasco Estates in Gainesville. He enjoyed many things in life, international cuisine, traveling the world, and anything to do with cars, but his greatest love was in spending time with his family. He is survived by his two daughters Aline Moukhtara (Kevin Bell), of Vienna, VA, and Alida (Michael) Meyer, of Germany; his grandchildren, Emma & Anne and Neo & Lucas; his longtime life partner and her children, Kelly Curry of Keystone Heights, Drew Bell of Keystone Heights and Thomas Curry of Gainesville; his brother, Sayed (Berit) Moukhtara, of Gainesville; sisters, Badia Zeidan, of Sydney, Australia; and Naza (Elie) Khoury, of Lebanon; nieces, Marianne (Kareem) and Silvia (Bassel); nephew, Philip; grand niece and nephews, Waheeb, Matteo and Melania. Graveside funeral services will be held on Monday, January 3, 2022, at 1:00 P. M., in the Countryside Cemetery, Gainesville. In lieu of flowers, please make donations to the American Red Cross; https://www.redcross.org/donate/donation.html

The family of Michel Moukhtara created this Life Tributes page to make it easy to share your memories.

Send flowers to the Moukhtara family.