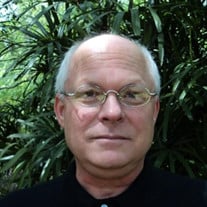 Michael W. Kuenstle, 59, of Gainesville, Florida, passed away Saturday, December 12, 2020. He is survived by his loving wife of 25 years, Nancy, and their son, Lucas; his father, Richard Kuenstle, siblings Deborah Klein, Susie Melendez, James Kuenstle, and John Kuenstle, along with a host of nieces and nephews. Michael was preceded in death by his mother, Patricia Ann Bishop, and his brother, Bryan Kuenstle. Michael was a great friend and a loving father, husband, brother, son, and uncle. He lived his life with a passion for the outdoors, especially fishing, playing baseball with his son, and taking care of the home he designed and built for his family. Michael was born September 28, 1961, in Houston, Texas, to Richard Kuenstle and Patricia Ann Kuenstle. He graduated from the University of Houston in 1989 and earned his Master’s Degree from Columbia University as a William Kinne Fellow, in 1991. Michael was an architect and founder, principle of Clark+ Kuenstle Associates. Throughout his career, he published and won multiple design awards for his building projects across North America. He was a Board of Trustee Member of the Florida Foundation for Architecture, the State Board Director for American Institute of Architects Florida, and the past President of the American Institute of Architects, Gainesville Chapter. Michael relocated to Gainesville in 1993 to teach at the University of Florida, where he was a dedicated educator and a valued faculty member in the School of Architecture for over two decades. In 2011, Michael was the recipient of the AIA McMinn Award for Education. Among his many publications, he co-authored Building Structures: Fundamentals of Crossover Design and Educational Facility Security Handbook. A private family Memorial Service will be held in Houston, Texas. A Memorial Service for family and friends will be held in Gainesville, Florida, at a later date. In lieu of flowers, the family requests donations in Michael’s memory to the American Lung Association, PO Box 11039 Lewiston, ME 04243.

The family of Michael W Kuenstle created this Life Tributes page to make it easy to share your memories.

Send flowers to the Kuenstle family.