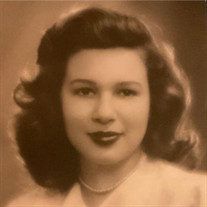 Mary Strasburger Cade June 29, 1929 – September 1, 2021 Mary Martha Strasburger Cade passed away in Gainesville on September 1 from complications related to the Coronavirus. Born on June 29, 1929, in Dallas, Texas to Henry and June Strasburger, Mary was part of the “Greatest Generation” who lived through the Great Depression and World War II. She was extremely compassionate and generous towards others, always putting the needs and desires of “her neighbor” ahead of her own. It turns out that everyone was her “neighbor” and no one escaped her love. She was always trying to fix everyone’s problems and wanted her children to engrave “She tried” on her tombstone. Despite mixed success in fixing the world’s problems, Mary had a special gift for helping those in need--whether friends, family, or total strangers. Mary graduated from the University of Texas in 1951 with a Bachelor of Nursing degree. While working as a nurse in Dallas, she met medical intern James Robert Cade in the emergency room, “over a child’s broken liver.” Warned by a close friend to “have nothing to do with that man,” she married Cade on June 1, 1953. The couple moved to Gainesville in 1961, where Cade had been recruited to start the Division of Renal Medicine at the University of Florida’s new medical school. Mary is credited with saving the Gatorade experiment of 1965 by suggesting that Bob “just add lemon” to disguise the drink’s repugnant taste. It was now drinkable--but just barely--and the Gators won in an upset against heavily-favored LSU. Mary was a member of First Lutheran Church in Gainesville, where she served in the prayer ministry until her death. She was also a member of the University of Florida Medical Guild and the North Central Florida Studebaker Driver’s Club (the cars that seemed to only break down when she was a passenger.) She and Bob also were initial donors to the Community Foundation of North Central Florida and helped found the Gloria Dei foundation and the Cade Museum for Creativity and Invention. Mary and Bob had six children, supplemented by many dogs and cats, some of which may have come from university research laboratories (the animals, not the children). The family eventually grew to include 21 grandchildren and 20 great-grandchildren, many of them named “Mary” after their beloved grandmother. She was preceded in death by her husband, James Robert Cade, sister Jean Strasburger Beck, and brother Allen Strasburger, a Marine, who was killed on Iwo Jima during World War II. She is survived by her brother, John Strasburger (Jean) of Seattle, WA, her children Michael Cade (Jackie), Martha Cade, Celia Cade, Stephen Cade, Emily Morrison (Bob), and Phoebe Miles (Richard). A memorial service will be held on Sunday, September 26, 2021, at 2:00pm at First Lutheran Church in Gainesville, Florida. 1801 N.W. 5th Avenue 32603.

The family of Mary Strasburger Cade created this Life Tributes page to make it easy to share your memories.

Send flowers to the Cade family.