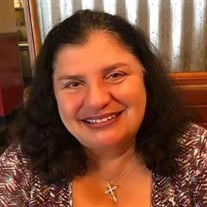 Embraced by her children and husband, Mary (Vukas) Spike, 69, peacefully passed away on September 25, 2021, at UF Health Shands Hospital in Gainesville, FL. Born in Savannah, G.A. on August 21, 1952, to her Croatian parents, Samuel and Jennie Vukas, the family moved shortly thereafter to Key West, FL. Mary grew up in Key West and was a 1971 graduate of Key West High School. After high school in the summer of ‘71, she was immediately employed by the Key West Naval Base, Truman Annex Supply Department as a federal civil service employee. After the closure of the naval base, she worked her way up at the Naval Air Station Key West on Boca Chica Key from a Shipment Assistant to a GS-9 Supply/Traffic Management Officer. She loved to dance and was a member of the group called, “Los Dandys de Boza” of Boza’s Comparsa from 1969 through 1972. From her first marriage to, Harry D. Lariz, Jr., she bore her two reasons for living, her son, Stephen Lariz and daughter, Amanda Lariz-McDaniel. At the chiming of the bells on New Year’s Day 1989, she married her second husband, Greg Spike, of Canaseraga, N.Y. They have been happily married ever since. Greg was in the navy and stationed in Key West when the couple met. After they wed, Mary and Greg moved the family from Key West to Virginia Beach, V.A. where Greg was stationed a couple of years. While living there, Mary worked at the Norfolk Naval Base. The family later returned to Florida and lived in Mayport, near Jacksonville from 1992 to 1995 where Mary worked as a legal secretary for the Jacksonville Area Legal Aid office in downtown Jax. After Greg retired, they moved the family to Newberry, FL, west of Gainesville. From 1995 to around 2010, Mary worked for the Koch Foundation as an Asst. Grants Manager, later promoted to Grants Manager. In 2019, she, her husband, and son moved to Gainesville, FL to be closer to her daughter. She loved her family more than anything and was the best “Nana” to her three grandchildren, Olivia, Christian, and Grace Lariz-McDaniel. She always enjoyed going to their softball and soccer games. She was so proud of her children and loved to hear her daughter sing, or see her son’s artistic drawings. Mary loved hanging out with her friends, talking about past times, or traveling with her husband. One of her favorite things to do was going to the Hard Rock Casino to play the slot machines. She was the type of person who was always smiling and laughing. Mary was all heart and loved everyone, but was a strong-willed woman and would tell it like it is. She grew up tough with her two older brothers, Johnny, and Tony. No matter how little she had in life growing up she never showed bitterness because of it. Instead, she would make do with what she had. She was extremely talented and smart. If she didn’t have something she needed, she would teach herself how to make it. As she became more independent, she would strive to make her life and her children’s lives the best they could be. She made sure that her children had everything they needed and never went without. She would leave no stomach empty. No matter who it was her door would always be open to those who are lonely or hungry. She was a wonderful cook and could bake an amazing lasagna for any occasion. Every year, her family looked forward to her Thanksgiving stuffing and Christmas pork, stuffed with garlic cloves and marinated in mojo. Mary was a devoted mother to her children. She would go to the ends of the earth to fulfill her family’s needs. She never said, “No”, and would always find a way. She was full Croatian and spoke the language fluently. Mary was a devout Catholic and a parishioner of Queen of Peace Catholic Church in Gainesville, FL. There’s no doubt for those who believe in afterlife that Mary is watching over her family. She will forever be deeply missed. Mary is preceded in death by her parents, Samuel, and Jenny Vukas; her older brother, John T. Vukas; her older sister, Agnes Vukas who passed at the age of three from cancer before Mary was born; and her ex-husband, Harry D. Lariz, Jr. She is survived by her husband, Greg Spike of Gainesville, FL; her older brother, Anthony (Tony) P. Vukas of Lake Worth, FL.; her son, Stephen Lariz; her daughter, Amanda Lariz-McDaniel (Kris), and 3 grandchildren, Olivia, Christian, and Grace, all of Gainesville, FL. Funeral services will be held on Saturday, October 2, 2021, 5:30 p.m. at Williams-Thomas Westarea, 823 NW 143rd Street Newberry, FL. with Fr. Marialal Joseph officiating. Family will receive friends at the funeral home from 4:30 p.m. to 5:30 p.m.

Embraced by her children and husband, Mary (Vukas) Spike, 69, peacefully passed away on September 25, 2021, at UF Health Shands Hospital in Gainesville, FL. Born in Savannah, G.A. on August 21, 1952, to her Croatian parents, Samuel and Jennie... View Obituary & Service Information

The family of Mary (Vukas) Spike created this Life Tributes page to make it easy to share your memories.

Embraced by her children and husband, Mary (Vukas) Spike, 69,...

Send flowers to the Spike family.