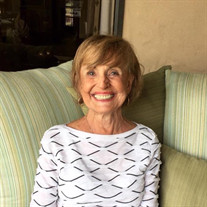 Mary “Diane” Heaney passed away peacefully surrounded by her family on October 14, 2021. Diane was a caring wife, mother, grandmother, sister, and friend to many. Diane was born to John and Abbie Neustadt on March 24, 1940, in Chicago, Illinois. She graduated from Saint Mary’s High School in 1958 where she had the lead role in the senior play, Sabrina Fair. After graduating from high school, Diane attended Clarke College in Dubuque, Iowa where she began her education and training to become a teacher. Her first teaching experience was at St. Eugene Elementary School in Chicago. During that time, she met the love of her life James “Jim” Heaney. They married in 1962 in Chicago, Illinois, and moved to Denver, Colorado where Jim was employed as a commissioned officer with the United States Public Health Service. Their two children, James Michael (1963) and Karyn Anne (1964) were born in Colorado. They returned to the Chicago area in 1964 so Jim could attend Graduate School at Northwestern University. In 1968, they moved to Gainesville where Jim had accepted a faculty position in the Department of Environmental Engineering Sciences at the University of Florida. They raised their two children Jim and Karyn in the Ridgewood subdivision with wonderful neighbors and friends. Diane returned to school where she got her Master’s and Education Specialist Degrees from the University of Florida in 1973. She began teaching at J.J. Finley Elementary School (4th and 5th grade) where she positively impacted many lives. Diane also worked at the University of Florida Teaching Lab. Diane and Jim lived in Boulder, Colorado from 1991 to 2003 where Diane taught at the University of Colorado Denver. She especially loved time spent in the mountains at their condominium in Grand Lake, Colorado. They returned to Gainesville in 2003 and settled in Haile Plantation. The greatest joy to Diane (a.k.a. “Di Di”) was becoming a grandmother to Abby (Austin) and Zack and Brianna (Heaney). She was ever-present with love, stories, games, and was constantly entertaining. Always with a flair for the dramatic, Di Di loved making videos with the grandkids, one of the highlights was to “All the Single Ladies” with over-choreographed dance moves. Diane also loved to travel and more recently enjoyed her water aerobics and bridge groups. She fought through some major surgeries and health issues the last five years, but always found a way to stay positive and thrived off her interaction with friends and family. She is preceded in death by her parents John and Abbie Neustadt, in-laws Pat and Mary Heaney, siblings Jack and Joe Neustadt, and brother-in-laws Terry Finegan and Don Newman. Diane is survived by her husband of 59 years, James P Heaney, her children James (Yanim) Heaney, Karyn Austin (Mark Nieuwenhuis), her grandchildren Abby (Austin), Zack and Brianna (Heaney), her siblings Arlene Newman, Bill Neustadt (Mary), Dan Neustadt (Colleen), Barb Neustadt, sister-in-law Maureen Finegan and precious nieces and nephews. Diane touched many lives in her journey on this Earth. She had an infectious smile, and a zest for life and people that will impact those who were lucky enough to have crossed paths with her. She was competitive until the end, especially with word games when her body didn’t cooperate with physical sports. We will all cherish our “Di Di” stories and hope her light and energy will shine in all of us as we mourn her passing. A Mass of Christian Burial will be held Friday, November 12, 2021, at 10:00 AM at Queen of Peace Catholic Church, 10900 SW 24th Ave, with Father Al Esposito as celebrant. She will be interred in the Queen of Peace Memorial Columbarium. In lieu of flowers, send memorial contributions to your favorite charity. For further information, please contact the Williams-Thomas Funeral Home (Westarea location) at 352-376-7556.

Mary &#8220;Diane&#8221; Heaney passed away peacefully surrounded by her family on October 14, 2021. Diane was a caring wife, mother, grandmother, sister, and friend to many. Diane was born to John and Abbie Neustadt on March 24, 1940, in... View Obituary & Service Information

The family of Mary "Diane" Heaney created this Life Tributes page to make it easy to share your memories.

Mary “Diane” Heaney passed away peacefully surrounded by her...

Send flowers to the Heaney family.