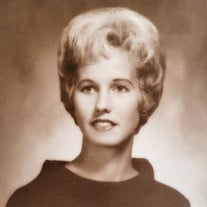 Not sure what to send?

Mary Lynn Besalski Barrow passed peacefully and surrounded by her family early in the morning of Thursday, April 28, at her home in the Village in Gainesville, Florida. She was born in Jackson, Mississippi, on September 30, 1936, to the Reverend Albert Herman Daniel Besalski, a Lutheran minister, and Wilma Pauline Mueller Besalski. At Boone High School in Orlando, she became an accomplished water skier and joined the swim team, before graduating in 1954. After briefly attending Florida State University, she transferred to the University of Florida, where she joined the Swim Fins, pledged into the Delta Delta Delta sorority, and earned a B.A. degree in Education in 1958. After graduation, Mary taught English in junior high school for several years, first in Orlando and then in the Alachua County School system. She married the love of her life, Mark Velpeau Barrow, Sr., a third-year medical student, on June 28, 1959. They had five children together over the next decade and remained a loving couple for nearly sixty-three years. In 1970, Mark and Mary Barrow purchased a large old colonial revival home in the Northeast Duckpond area of Gainesville that had once belonged to UF President John J. Tigert. Over the next several years, Mary transformed this long-neglected old house into what has been described as the “Crowned Jewel” of the Duckpond neighborhood, a home full of antiques, warmth, and charm. With the knowledge and skills gained on that project, over the next two decades Mary then completed two-dozen major restoration projects, including an old church building on East University Avenue that housed the Barrow Family Store, an antique shop that she and her husband operated for several years; the Hodges House, a beautiful Victorian house that was moved a mile from its original site in downtown Gainesville before she restored it; the Padgett House in the Duckpond neighborhood; the Bailey House on Northeast Sixth Street, an adult congregate living facility and the oldest house in Alachua County; Kelley Lodge, the former site of the Salvation Army on East University Avenue which she transformed into her husband’s medical office; and several others. As a contractor and President of the family-owned Victoria Restorations Construction Co., Mary drew up renovation plans, supervised the work crew, hired subcontractors, and performed nearly every task associated with old house restoration at one point or another. Mary was also active in historic preservation more generally. In 1972, she and several Duckpond neighbors founded Historic Gainesville Incorporated, and she served in several leadership positions in that organization for several years as it raised consciousness about the value of historic preservation and helped establish Gainesville’s first historic district. She also served as secretary, board member, and vice president for the Florida Trust for Historic Preservation, and as Committee Chair for Acquisition of the Bonnet House Museum and Gardens, an important historic site in Fort Lauderdale that the Trust acquired under her and the University of Florida Professor Roy Hunt’s guidance in 1983 and listed in the National Register a year later. Mary had a special fondness for being near the water. Not long after marrying, she began spending several weeks each summer at a family cottage on Choctawhatchee Bay in Fort Walton. Her favorite activities there included boating, making beach outings, and catching crabs, which when boiled, became the centerpiece of elaborate family meals. In 1993, after almost two decades of joining her brother Bob and his family for a week in Daytona Beach at the end of each summer, she and her husband purchased a condominium at Crescent Beach that became their favorite get-away from their busy lives in Gainesville. In 2001, they moved to a house on Lake Melrose that she had lovingly restored. The chance to wake up each morning and watch the sun come up over this beautiful lake helped make this one of the happiest periods in her life. Beyond her fondness for life on the water, Mary was an intrepid traveler. She loved to explore new places, visit art museums and historic sites, and sample new foods. In addition to numerous long family trips by car to the West, Maine, North Carolina’s Outer Banks, Washington, D.C., and New York City, Mary traveled to Alaska, Mexico, the Caribbean, Turkey, and Europe accompanied by her husband, her daughters, or her friends. There were several periods in her life when she never really unpacked her suitcase. Mary Barrow was an amazing wife and mother who lived an incredibly rich and fulfilling life. She worked extremely hard while raising a family of five children, restoring old houses to their former glory, and serving the community in countless ways. At the same time, she perfected the art of knowing how to have a good time. She loved to cook and eat good food, travel, enjoy the company of family and friends, and perhaps more than anything else, bask in the sun by the water with an ice-cold beer. In short, Mary knew how to love deeply and unconditionally, how to live a life of meaning and purpose, and how to have fun. As a devout lifelong Lutheran, she also took great comfort in the certain knowledge that following her death, she would join her Mother and Father in Heaven. Mary is survived by her husband, Dr. Mark Velpeau Barrow, Sr.; her brother, the Rev. Robert Conrad Besalski; her sister, Carolyn Besalski Barton; and five children: Mark Velpeau Barrow, Jr. (Marcia), William Richmond Barrow (Heather Andrews), John Robert Barrow (Kerry Dowd), Mary Angela Barrow Peffley (James), and Amy Elise Barrow Brumfield. In addition, her legacy will be continued by her twelve grandchildren and four great-grandchildren. In lieu of flowers, the family asks for donations to the Matheson Historical Museum, 513 E. University Avenue, Gainesville, FL, 32601. Private funeral services were held on Tuesday, May 3, 2022, at 1:00 PM, at First Lutheran Church of Gainesville, FL, and a public Celebration of Life, will be held on June 18, 2022, at a time TBA, at the Williams-Thomas Funeral Home, 823 NW 143rd St, Newberry, FL

Mary Lynn Besalski Barrow passed peacefully and surrounded by her family early in the morning of Thursday, April 28, at her home in the Village in Gainesville, Florida. She was born in Jackson, Mississippi, on September 30, 1936, to the Reverend... View Obituary & Service Information

The family of Mary Lynn Besalski Barrow created this Life Tributes page to make it easy to share your memories.