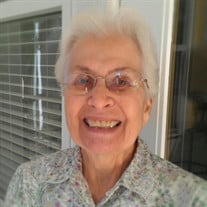 Mary Louise (Smith) Allee, 89, of Newberry, Florida, passed away Saturday, December 11, 2021, at her residence. Born July 3, 1932, in Rockville, Indiana, she was the daughter of Ralph D. and Catherine L. (Hall) Smith. Her husband of 59 years, Bonner Newlin Allee, whom she married on July 3, 1950, preceded her in death on December 16, 2009. Mary was a 1950 graduate of Montezuma High School (Indiana). She was a homemaker and accompanied her husband to Wabash College and then to various towns in Indiana where he taught school and coached basketball. In 1962 the family moved to Virginia. During almost 30 years in Springfield, Virginia, Mary was active in her neighborhood church (First Baptist) and in her community, participating in such activities as volunteering at the local elementary school and teaching English as a Second Language. She loved to read, listen to music, sew, quilt, and needlepoint. She enjoyed traveling with her husband all over the U.S., and at age 80 she went to Europe for the first time to go on a Danube River cruise with her daughter. Mary was a chronicler of family history and the creator of treasured family photo albums. She and her husband moved to Hartwood, Virginia, in 1989, and to Newberry in 2004. Mary was a member of the Coloma Friends Church in Coloma, Indiana, since childhood. She attended the Gainesville Friends Meeting after moving to Florida. Survivors include two sons, Charles F. Allee and his wife, Susan, of Newberry, Florida, and Thomas N. Allee of Pearl, Mississippi; a daughter, Catherine Linn Deavers and her husband, Jeffrey, of Arlington, Virginia; two sisters, Eleanor Asbury of Marshall, Indiana, and Doris Crockett of Marion, Indiana; a brother, Donald L. Smith of Eaton, Ohio; six grandchildren, Jennifer DiSanto of Gainesville, Florida, Brandon Allee of St. Augustine, Florida, Scott Donaldson of Washington, D.C., Pamela Donaldson of Arlington, Virginia, Allyson Young of Florence, Mississippi, and Aaron Allee of Brandon, Mississippi; and ten great-grandchildren. She was also preceded in death by a sister, Esther Kerns, a brother, Howard D. Smith, and a granddaughter, Kristen Allee. Services will be held at a date in 2022 to be announced later with interment of ashes at Bloomingdale Cemetery (Indiana).

Mary Louise (Smith) Allee, 89, of Newberry, Florida, passed away Saturday, December 11, 2021, at her residence. Born July 3, 1932, in Rockville, Indiana, she was the daughter of Ralph D. and Catherine L. (Hall) Smith. Her husband of 59 years,... View Obituary & Service Information

The family of Mary Louise (Smith) Allee created this Life Tributes page to make it easy to share your memories.

Send flowers to the Allee family.