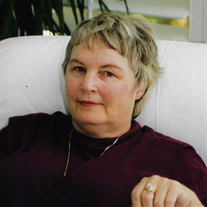 Martha Ellen Storm, age 83, a resident of Gainesville, died peacefully on Monday, June 7, 2021, at UFShands Hospital shortly after suffering a stroke. Martha was born on November 4, 1937, in Shawnee, Oklahoma, to Virginia Watson (Gallaher) Abernathy and Dr. Paul Clark Gallaher. She graduated from Shawnee High School in 1955 and earned an undergraduate degree in art from Stanford University in 1959. After studying painting at the California College of Arts and Crafts in Oakland, California, she earned a Master of Fine Arts in painting at The University of Texas-Austin in 1964. Martha spent most of her adult life in the Dallas, Texas area. In 2014 she moved to Gainesville from Gun Barrel City, Texas. Martha was preceded in death by her husband, Richard P. Storm, her parents, her sister Nancy Gallaher Witt, her brother Paul Clinton Gallaher, and her niece Melinda Witt Johnson. She is survived by her sister Virginia Gallaher Maurer, of Gainesville; niece Susan Macon Witt of Atlanta, nephews Ralph Emmett Maurer, of West Palm Beach, William Edward Maurer of Gainesville, and David Frankllin Witt of Dallas, Texas, grand nieces and nephews, a great grand nephew, and many close friends and more distant family, with whom she communicated faithfully. Martha was an Oklahoman by birth, and a Texan by choice. She was a complex mixture of intellect, East Texas culture, artistic precision, and independent spirit. From the beginning, she was going to live her life her way. She loved science, subscribed to several science journals, and looked forward eagerly for the Tuesday edition of the New York Times. She traveled extensively in Europe and Mexico in her youth. She reveled in stories such as eating pizza on the steps of the Parthenon and haggling in the silver markets of Taxco or over a vase in Istanbul. Early on in Dallas, she worked at Sanger Harris department store as a portrait artist and as a creative designer in the early years of educational television. In later years she made her living with rental houses that she owned in the Dallas area and a portrait studio in her home. She was an extraordinary portrait artist. She will be remembered in the family as the eccentric and beloved “Aunt Martha.” Her cremains will be buried in the Courtyard of Holy Trinity Episcopal Church, Gainesville when the family can gather.

The family of Martha Ellen Storm created this Life Tributes page to make it easy to share your memories.

Send flowers to the Storm family.