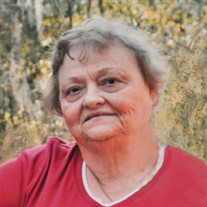 Mrs. Martha Faye Thomas Rain, 77, of Sanderson, Florida, formerly of Gainesville, died Tuesday, January 5, 2021, in the St. Vincent’s Hospital, following a long illness. Mrs. Rain was born in Gainesville, Florida on July 9, 1943 to the late Oscar and Betty June Thomas. She was a graduate of Gainesville High School, Class of 1961. Shortly after graduation she was wed to Mr. Stonewall Coburn Rain, to whom she was married for 25 years until his death in 1986. Mrs. Rain was a Navy wife, moving with her husband and family all over the country, from Hawaii to Alaska to Maine. After Mr. Rain’s retirement from the Navy, they moved back to Gainesville, where she continued spending time loving on her family, now her grandchildren and great grandchildren. She was a member of Highlands Presbyterian Church, Gainesville. She is survived by two daughters, Lynn (Kenneth) Clark and Dodie (Daniel) Ryder; one son, Randy Rain; seven grandchildren, Michael Mann, Jennie Cahoon, Callie Mann, Ashley Sutton, Lauren Redding, Lauren Thomas and Amanda Ryder; and by eleven great grandchildren, Braden, Addie and Mason Egan, Jaidan and Dommie Mann, Ivy Cahoon, Dakota Smallwood, Gracie and Gabe Clark and Peyton and J. J. Miller. Graveside funeral services will be conducted Monday, January 11, 2021 at 1:00 P. M., in the Evergreen Cemetery; the family will receive friends prior to the service, beginning at 11:00 A. M., at Williams-Thomas Funeral Home Downtown, 404 North Main Street, Gainesville, Florida.

The family of Martha Faye Thomas Rain created this Life Tributes page to make it easy to share your memories.

Send flowers to the Rain family.