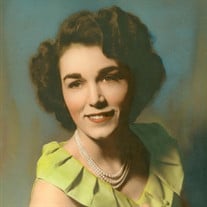 Marion Rose DuBois Hughart, age 93, passed away on February 16, 2021, in Gainesville, FL. She is now with the Lord Jesus Christ. She was born in Homestead, Fl. in May 1927. She grew up in Jupiter and graduated from Jupiter High School and attended Florida State College for Women. She was an active member of the Gainesville Baptist Church for four years and enjoyed working in the church nursery and AWANA’s for thirty years in Jupiter/Tequesta at the 1st Baptist Church. She loved witnessing and passing out tracts on her walks. She is preceded in death by her husband John F. Hughart, and her daughter; Connie Rose Hughart Bull. She is survived by her daughter and caregiver to her for her last twelve years, Shirley (Berkstresser) Hughart. She has two sons; Cecil Hughart, and Wayne Hughart, and his wife Rilla Hughart, and their two daughters; Shannon Hughart, and Stacey Hughart Pedemonti. Cecil and Marialyce have a daughter Rosemara Hughart. Marion grew up in Jupiter, Florida with her three brothers; Arthur DuBois, Alden DuBois, and was preceded in death by her brother Pierre DuBois when he was five. Her parents Dorothy Tower DuBois and Henrys DuBois organized a U.S.O. for Camp Murphy in Hobe Sound to entertain the troops. Marion tap danced and had ping-pong. There, she met WWII Marine John F Hughart and three years later were married after he came back from the Pacific Islands. They corresponded during his deployment overseas. They moved to Chicago where her husband worked as an elevator repairman for twenty years. They had four children and she was widowed at age 40 and raised her children through her Faith in God. She has written a book of over forty poems. Her family were pioneers in Jupiter, FL and her grandparents Harry and Susan DuBois built the DuBois Pioneer Home which is now in a museum on the Jupiter Inlet. A funeral service will be held on Saturday, February 27, 2021, at 10:30 a.m. at the Gainesville Baptist Church 3570 N.W. 16th Blvd with Pastor Brad Noble Officiating. Burial will be on Monday, March 1, 2021, at Riverside Memorial Park at 2:00 p.m. in Jupiter Fl. 19351 SE City Line Rd Tequesta, FL. The family will receive friends on Friday 26, 2021 from 5:00 to 7:00 p.m. at Williams-Thomas Funeral Home Westarea 823 N.W. 143rd street Newberry, Florida. In lieu of flowers, the family requests that donations be made in Marion’s name to Child Evangelism of Florida Inc. www.cefofncfl.com.

Marion Rose DuBois Hughart, age 93, passed away on February 16, 2021, in Gainesville, FL. She is now with the Lord Jesus Christ. She was born in Homestead, Fl. in May 1927. She grew up in Jupiter and graduated from Jupiter High School and attended... View Obituary & Service Information

The family of Marion Rose DuBois Hughart created this Life Tributes page to make it easy to share your memories.

Send flowers to the Hughart family.