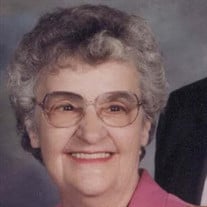 Marie Homza, 94, died peacefully Sunday morning, February 6, 2022 after a brief time at Haven Hospice, Gainesville, Florida. She was a caring daughter, a loving wife, a mom who would do anything for her sons. She was an awesome Grammy, who loved to spend time with her grandkids, and a precious great-Grammy to her four great-grandchildren. She was a giving person to her larger family and to her neighbors and friends. Marie was born to the late Rosa (Hart) and Thomas Stephenson, the eighth of nine children. She married her beloved husband Eli, and they spent nearly 55 years together before his death in 2001. She was preceded in death by all of her siblings and her son Michael, along with many dear friends. Marie was a founding member of Saint Eugene Church in Liberty Boro, Pennsylvania. She prepared hundreds of children for their First Communion as a religious education teacher, a ministry that meant so much to her. She was also a member of the choir and a frequent volunteer at the church’s events and at the summer festival flea market. In her later years she was a member of the Sonshiners group in McKeesport and developed many cherished friendships there. She has lived in Gainesville, FL for the past five years to be nearer to her family. Marie is survived by her son Eli A Homza Jr and her daughter-in-law Mary Jean, her grandchildren Eli (Drew) Homza III, Amy Tompkins and her husband Jeff Tompkins, Greg Homza and his wife Leah Papay, and her great-grandchildren Emma, Ava, Connor and Lucy Tompkins. She is also survived by her daughter-in-law Mary Frances Homza, her niece and nephew Joyce and Raymond “Wimp” Stephenson who provided her with so much help prior to her move to Florida, her friends and telephone companions Gina and Betty who were a blessing to her in her final years, and many cousins, nieces and nephews. A Funeral Mass will be celebrated Friday, February 11, 2022 at 9:30 a.m. at Holy Faith Catholic Church with Fr. Emmanuel Pazhayapurackal as celebrant. Interment will be at a later date in Pennsylvania.

Marie Homza, 94, died peacefully Sunday morning, February 6, 2022 after a brief time at Haven Hospice, Gainesville, Florida. She was a caring daughter, a loving wife, a mom who would do anything for her sons. She was an awesome Grammy, who... View Obituary & Service Information

The family of Marie Homza created this Life Tributes page to make it easy to share your memories.

Send flowers to the Homza family.