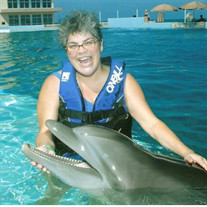 Maria Ligia Del Carmen Gavidia Contreras was born September 17, 1958 in San Salvador, El Salvador. She was predeceased by her father Francisco Gavidia, her aunts Matilde Contreras, Estefania Acevedo Contreras and Dr. Elba Contreras, uncle Julio Contreras, cousin Ana Julia Acevedo and brother Mauricio Gavidia. Maria was a graduate of Colegio de La Asuncion in San Salvador, and later emigrated to the US to join her mother Leticia Gavidia in Washington DC. While in the United States, she attended St. Mary Academy in Alexandria VA and later graduated from George Washington University with a double major in Anthropology and Environmental Studies. She then completed a Master’s degree in Environmental Planning at UCLA. She was asked by the Salvadorean government to serve as Vice Minister of Environment for her home country as they planned an extensive highway project. She then returned to the US and worked as a consultant to USAID and the World Bank on environmental projects. In 2006 Maria moved to Florida to take a position with The US Department of Labor funded Health Career Opportunity Project at Santa Fe College. When that project ended, she went to the International Center at the University of Florida, where she advised study abroad students traveling to Austria, Switzerland, Italy and Greece. She later transferred to the College of Design, Construction and Planning, where she advised students in architecture and other related programs. She completed a Master’s degree in Spanish Literature during her tenure at DCP and began a doctoral program in Urban and Regional Planning, focusing on disaster plans for poor seaside villages in rural El Salvador. When the area became volatile because of crime and gangs, she suspended her PhD studies and transferred to the College of Medicine. She served as coordinator for NIH funded research at the Clinical and Translational Studies Institute. Maria’s greatest joy was loving connections with family and friends; she made an enormous and lasting positive impact on all of them. She is survived by her wife Diane Gavidia, her mother Leticia Gavidia, and daughters Aimée Gross (Keith) and Shelby Gross. She also leaves five grandchildren; Vanessa Gavidia (Jonathan), Mackenzie Marsh, Hunter Marsh (David), Levi Marsh, Alexis Van der Wuerff (Willem), great-grandsons Josiah Justiniano and Xavier Delgado, godfather/cousin Simon Acevedo, cousins Carmen Elena Colorado and Marta Eugenia Acevedo and great-nephew Jose Manuel Castaneda. Her wish is to be cremated and her ashes scattered on her farm and by the ocean that was her first love in life. There will be no formal service at this time. If friends and family members wish to make a donation in her name, the following organizations were special to her: Retirement Home for Horses millcreekfarm.org PO Box 2100 Alachua FL 32616-2100 South Florida SPCA spca-sofla.org PO Box 924088 Homestead FL33092

The family of Maria Ligia Del Carmen Gavidia Contreras created this Life Tributes page to make it easy to share your memories.