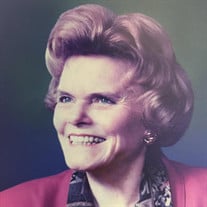 Margaret (her family knew her as Maggie) was born in Roscoe, Texas on January 7, 1931. If you asked her where Roscoe was, she would give you directions from Sweetwater, Abilene and Fort Worth. In 1948, she graduated from Roscoe High School and was the class valedictorian, which should come as no surprise to anyone who knew her. She received a scholarship to the University of Texas and graduated in 1952, earning a degree in Liberal Arts. There, Maggie met her future husband, Bill Eppes, with whom she spent 28 years of marriage, travelling to various naval bases, moving back to Austin, and eventually settling in Gainesville in 1968, where she lived the rest of her life. She earned a master’s degree in Communications from the University of Florida in the early 1970s and created a film business featuring building construction videos. In the early 1980’s, after raising her two sons, Stephen and Cory, she became passionately involved in civic organizations in North Central Florida. Margaret ran for state senate in 1982, and though narrowly defeated, she won Alachua County. In 1992, she ran for and won a seat in the Alachua County Commission where she served as chair in 1995-1996. During her tenure, she fought for civil rights, including being an ardent supporter of gay rights (as it was then called), and subsequently established herself as a spokesperson for underserved communities. After her time as a civil servant, she entered the real estate field and later became a professor at City College in Gainesville where she taught English. A lifelong cat lover, in 2008 she published a book titled A Tale of Two Kitties, an introspective about her two beloved cats, Sam and Delilah. Her many accomplishments aside, what she loved most was her family. She was preceded in death by her father, Charles, and her mother, Leora. She is survived by her two sons, Stephen and Cory, and her four grandchildren, Paul, Elisabet, Colyn and Victoria. She has always been very close with her sister, Louise, and likewise Louise’s children (and grandchildren). “Grand Maggie” was a trailblazer of her time and will always be remembered for her love of life (she would break into song multiple times a day), her devotion to family, her passion about civil rights, her commitment to her beliefs, and to anyone who was lucky enough to try one, her amazing Thanksgiving and Christmas hot rolls. She died on February 10, 2022 after a brief illness. A Celebration of Life will be held Saturday, May 7, 2022 at 2:00 p.m. in the chapel of Williams-Thomas Funeral Home Downtown, 404 North Main Street.

Margaret (her family knew her as Maggie) was born in Roscoe, Texas on January 7, 1931. If you asked her where Roscoe was, she would give you directions from Sweetwater, Abilene and Fort Worth. In 1948, she graduated from Roscoe High School... View Obituary & Service Information

The family of Margaret Cole Eppes created this Life Tributes page to make it easy to share your memories.

Margaret (her family knew her as Maggie) was born in Roscoe,...

Send flowers to the Eppes family.