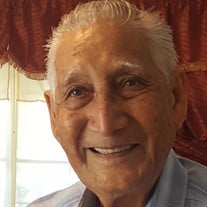 Manuel Godina, 86, of Gainesville, FL died Wednesday, February 10, 2021, at Haven Hospice. He was born in Jimelles Cohilla, Mexico on September 22, 1934, to Manuel & Enriqueta Jaques Godina, and had three brothers, and two sisters. Manuel was married to Elvira, his wife of 63 years, and had two sons, Arturo & Armando, and one daughter, Petra. They raised their family in Racine, WI where Manuel worked for 25 years as a machinist for J.I. Case/International Tractors and retired with a full 30-year pension. After their children had grown and married with children of their own, Manuel and Elvira loved spending time with their grandchildren enjoying every chance they had to be with them. They were wonderful grandparents! Early in his married life, Manuel gave his life to Lord, and became a devoted Christian, and looked for opportunities to share the gospel with others. He began as a volunteer, doing prison ministry, and helped many come to know Jesus Christ. After retiring he and his wife moved to Tyler, TX where he devoted much of his time there also as a volunteer doing prison ministry. He also enjoyed fishing and took every opportunity he could to do so. Manuel and his wife then moved to Gainesville, FL in 2006 to be closer to their children in their last years. He continued in prison ministry for a few more years until he was not physically able to do so. Manuel was preceded in death by his parents, two brothers, and his wife, Elvira. Manuel is survived by his sons, Arturo & Armando Godina, both of Jacksonville, FL; his daughter, Petra Johnson of Gainesville, FL., sisters; Rosa, and Enriqueta, brother; Armando, and eight grandchildren, ten great-grandchildren, and one great-great-grandchild. A gravesite memorial to honor his life will be held at Countryside Cemetery, 10926 NW 39th Ave. Gainesville, FL on Wednesday, February 24, 2021, at 2:00 p.m. In lieu of flowers, for those who wish, donations may be made in his honor to Haven Hospice, 4200 NW 90th Blvd. Gainesville, FL 32606.

The family of Manuel Godina created this Life Tributes page to make it easy to share your memories.

Send flowers to the Godina family.