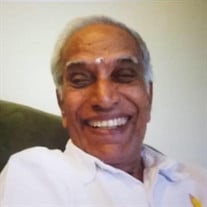 Manickaratnam S Krishnarayapuram, aged 90 left this mortal realm on April 19th at his home in Gainesville, Florida with his loving wife beside him. He was born to Madhurambal and Sambamoorthi in Sithalavai, a modest village in Tamilnadu, India on July 1st 1930, as one of 6 children. His love for education helped him secure an undergraduate degree at National College, Tiruchirapalli and a Master’s in Education at Teacher’s College, Chennai. His career commenced as a mathematics teacher and he retired as the headmaster of P.S.Higher Secondary School in Chennai, India. He continued to teach even past retirement, by living with his belief that everyone should be educated regardless of socioeconomic status, gender, caste, creed or capability. True to his name “Manickaratnam”, he was a gem of a teacher, making an ever lasting impact on the countless number of students who came under his guidance. Godavari, his beautiful wife, entered his life on May 25th, 1966. Then began their memorable journey together which brought along three loving daughters - Malathi, Srimathi and Gayathri. Loganathan, a student of his, grew up as a non biological son in his fold. Over the years, the family expanded with his wonderful son-in-laws who he regarded as his ”sons” - Gopal, Senthil and Sudhir. He loved his hometown where his extended family of nieces, nephews and great grandchildren live. He embraced change and moved from India to the United States to be closer to his immediate family. He always believed and lived by the saying “Be a Roman in Rome”. His best buddies were his 3 grandsons and 3 granddaughters to whom he is “Thatha”. He enjoyed cruises, beaches and roller coaster rides with them even at the age of 78! He had a sweet tooth, loved pastries, pizzas, ice cream and snacks. He spent his post retirement time tutoring, reading books, taking walks, participating in study circles, attending recitals, writing math facts for children, folding laundry and helping in the kitchen. Family meant everything to him and was not confined to the 4 walls of his home. A true teacher, “Sir” as he was fondly called by all - students, friends and relatives alike, lived his entire life embodying selfless and unconditional love for all. Humility, simplicity, integrity and contentment were hallmarks of his character. He had a place in his heart for everyone he met in his life. They considered him as their own father, brother, uncle or grandfather. He showed how to let life unfold on its own and be equanimous with that million dollar smile. Mental strength and the unshaken belief in divine grace brought him courage and peace at heart despite his health setbacks. His life is an example of how one can be happy and peaceful without material pursuits. He leaves behind a wealthy legacy of pure love and precious memories in our hearts. We will celebrate his life by living through his values and wisdom. A funeral service will be held Sunday, April 25, 2021 at 2:15 p.m. at Williams-Thomas Funeral Home Downtown, 404 North Main Street. In lieu of flowers, please make donations to University of Florida Health/Cardiology at www.giving.ufhealth.org. You can also join us during the service online, see link: https://www.facebook.com/events/209886767250457. If you do not have facebook another link will be provided just before the service here.https://www.facebook.com/112749393781461/videos/903144530476277

Manickaratnam S Krishnarayapuram, aged 90 left this mortal realm on April 19th at his home in Gainesville, Florida with his loving wife beside him. He was born to Madhurambal and Sambamoorthi in Sithalavai, a modest village in Tamilnadu, India... View Obituary & Service Information

The family of Manickaratnam S. Krishnarayapuram created this Life Tributes page to make it easy to share your memories.