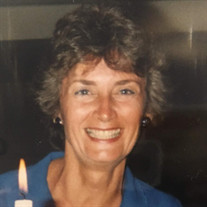 Lynda Yvonne Short, born in Rochford, England, three months after the end of World War II, passed away Friday in Gainesville, surrounded by the love of her family. Lynda’s sense of humor and penchant for never forgetting to send a handwritten card for birthdays, anniversaries, and most holidays, endeared her to friends and family across the globe. She loved animals, especially her dachshunds – Chloe and Fritz – and eagerly volunteered to care for neighborhood pets whenever she had the opportunity. She always kept treats at hand so she could garner the affection of any dog lucky enough to cross her path. Lynda and her late husband, Ronald Arthur Short, also loved bringing warmth and happiness to humans, especially older people and those without family and friends. The couple had a tradition of dressing up as pilgrims to visit nursing homes on Thanksgiving, with Ron playing songs on his keyboard and singing while Lynda visited with residents and spread love among the lonely. Ron did most of his playing for Lynda. He had a habit of playing the Beatles’ ‘When I’m 64’ on his keyboard, first tapping a broomstick on the ceiling at their home in New Port Richey to make sure Lynda was listening from upstairs. Ron died in 2003, at age 59. The couple, who grew up together in England before marrying and having two daughters, made a difficult decision to leave behind many family members and friends to migrate to America in 1978. They settled in Tewksbury, Mass., where Ron started a successful business specializing in asbestos removal, lead-paint abatement, and neutralizing other environmental hazards. He sold the business in 1988, and the couple relocated to Florida. Lynda loved listening to music and had a collection of records ranging from classical to reggae, from Neil Diamond and Brenda Lee to Queen. She enjoyed going to the theatre with her sister when in London and frequently attended community performances in Florida. In addition to theatre, Lynda was an avid supporter of Gator sports, especially women’s basketball. She had an extensive collection of orange and blue attire and enjoyed throwing themed parties that gave her an excuse to dress up in one of her many elaborate costumes. She is survived by her sister, Liz Coleman of Rayleigh, Essex, England; her daughters – Melanie Jane (Doug) Carlson, of Tallahassee and Justine (Matt) Abram, of Gainesville; four grandchildren – Hannah and Calvin Carlson of Tallahassee, and Megan and Rachel Abram of Gainesville; and four grand-dogs – Percy, Odin, Bmo, and Duke. Lynda was immensely proud of her two daughters, and kept close tabs on her “grands,” as she so affectionately called the grandchildren. Nanny taught Hannah, the eldest grand, how to knit and enjoyed regular conversations sprinkled with questions about yarn, patterns, and her dog Percy. Calvin shares Nanny’s love for the outdoors and a remarkable green thumb, and he regularly gifted Nanny with flowers and plants to brighten her home. Megan, who is studying animal sciences, shares Nanny’s love and adoration of all animals, no matter the size. Megan and Nanny were frequent patrons of the Retirement Home for Horses at Mill Creek Farm. Rachel, who is studying to be a nurse, took exceptional care of Nanny over the last few years. Nanny was always quick to dote on Rachel’s delightful bedside manner and was incredibly proud of her work ethic and success. In 1994, when her first grandchild was born, Lynda began crafting Christmas ornaments for each child yearly. When the time came for the grands to have their own Christmas trees, she wanted each to already have a plentiful supply of ornaments. Lynda was preceded in death by her parents, John and Irene Chaplin, her beloved aunt, Alice Miller, her brother Geoff Chaplin, and her husband. After Ron’s death, Lynda lived in Gainesville, Alachua, Ocala, and Tarpon Springs before returning to Gainesville. She leaves behind many cherished friends with whom she shared beautiful memories, and countless sweaters, mittens, and assorted items she knitted for others. In lieu of flowers, the family requests that you consider ways to show love to those who are alone, especially older people and children, and donations to support senior services, your local humane society, or the Retirement Home for Horses at Mill Creek Farm.

Lynda Yvonne Short, born in Rochford, England, three months after the end of World War II, passed away Friday in Gainesville, surrounded by the love of her family. Lynda&#8217;s sense of humor and penchant for never forgetting to send a handwritten... View Obituary & Service Information

The family of Lynda Yvonne Short created this Life Tributes page to make it easy to share your memories.

Send flowers to the Short family.