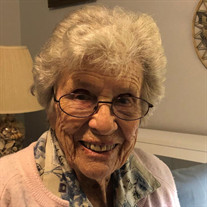 Linda S. Beck, 97, of Gainesville, Florida, died Wednesday, September 22, 2021, in the E. T. York Haven Hospice Care Center, after a long and fulfilling life. Mrs. Beck was born on August 24, 1924, in Honesdale, Pennsylvania to the late Ellis and Pauline Stimpson. She graduated from Honesdale Public Schools. During WW2, she was employed at the Department of Public Instruction in Harrisburg, Pennsylvania. Mrs. Beck was also employed for many years by the Wayne County Farmer’s Mutual Insurance Company, until her retirement after 30 years. She lived for many years in Fairlane Acres in Bradenton, Florida. She was a longtime member of the Grace Episcopal Church, in Honesdale, where she was a member of the Episcopal Church Women, the Trinity Guild and the Altar Guild. Mrs. Beck later became an associate member of St. George’s Episcopal Church of Bradenton. She was an honorary member of the Alert’s Women’s Auxiliary, member of the Women’s church bowling league and was a past member of the Jr. Auxiliary of Wayne Memorial Hospital as well as a charter member of the Rare Squares dance club, a member of the Fairlane Acres Association and the Woman’s Shuffling Team. Mrs. Beck was preceded in death by her husband of 59 years, Walter A. Beck, who passed away in 2005; a brother Douglas F. Stimpson, who passed away in 2006; a daughter in law Christine A. Beck who passed in 2020 and a step-granddaughter, Jenise Pollock. She is survived by her son, Douglas C. Beck, of Gainesville; a grandson, Anthony T. Beck, of Las Vegas, Nevada; a granddaughter Jenna M. Beck, of Gainesville; along with several nieces, nephews, grandnieces, and grandnephews. A memorial service will be held on Saturday, October 16, 2021, at 3:00 P. M., in the St. George’s Episcopal Church, 912 63rd Ave W., Bradenton, Florida. Internment at the church’s column burial will follow the service. In lieu of flowers, please make donations to St. George’s Episcopal Church.

The family of Linda S. Beck created this Life Tributes page to make it easy to share your memories.

Send flowers to the Beck family.