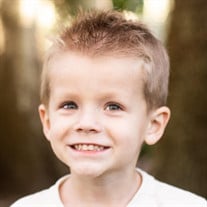 Lennox James Allen was born Feb 9, 2015 in Des Moines, IA to Gary James Allen and Carly Dawn Allen, joining older brother Austin. His earthly journey was challenged by a diagnosis of ATRT, a rare type of brain cancer, and ultimately succumbed to its effects on May 16, 2020 at the young age of 5. Lennox was a joy to this world, with eyes that could light up a room, and had a contagious smile to uplift all those around him. After moving to Gainesville, FL with his family, he began having symptoms that led to a diagnosis of ATRT at age 2. He courageously endured brain surgery, recovery, hospitalizations, chemotherapy, stem cell transplants, and proton radiation therapy. He did all that was asked of him through the worst of times, often with a smile on his face that defied common comprehension. By his birthday at age 3, he “rang the bell” signifying the end of treatments. He was a miracle boy, and quickly became known for his genuine kindness, thoughtfulness, and true love for everybody around him. He embraced the role of older brother as Darren was born into the family, just one floor down in the hospital in the midst of his treatments. They spent the next 2 years together, learning again how to eat, walk, talk, and play like boys should, with example from their older brother Austin. He overcame his many deficits and side effects, progressing to scooter riding, playing soccer, beach adventures, UF Gator games, and joined his preschool class, which quickly became his true pride and joy. He loved his teacher Ms Eubank, his best friend Frankie, and riding the bus every day. He loved all things Disney, including frequent trips to nearby Disneyworld, and was blessed with a magical Make-a-Wish Disney cruise just weeks prior to his cancer symptoms returning. He is survived by his parents, Gary and Carly, and brothers Austin (8) and Darren (2) of Gainesville, FL. His grandparents include Andy and Renae Allen of Brigham City, UT and Brady and Kaye Benham of St. George, UT, along with many aunts, uncles, and cousins who miss him tremendously. The family would like to thank all the family and friends who have given an outpouring of love and prayers. Special thanks is also given to all the physicians and healthcare providers at UF Shands Children’s Hospital, whose exceptional care gave Lennox a second chance at life for another 2.5 amazing years. Lennox will be laid to rest on Sat. May 23, 2020 in Pensacola, FL. Memorial services will be held later in Gainesville, FL sometime in the coming weeks, with announcement to follow.

The family of Lennox James Allen created this Life Tributes page to make it easy to share your memories.

Send flowers to the Allen family.