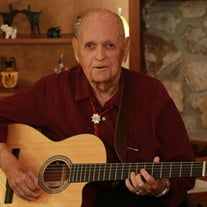 Larsen Leroy Crocker, age 92, passed away peacefully at the Gainesville, FL. VA Medical Center, his stepson and stepson’s wife at his side, and went to be with his Lord and Savior December 8, 2021. Hollywood, as he was known to many of his friends, was born October 22, 1929 in Newberry, FL to Acie and Clara Crocker. He lived a long and full life spanning over nine decades, from the Great Depression to the Great Pandemic. He proudly served in the US Army between WWII and the Korean War. After his military service, he traveled and played as a session musician with many different country music groups, including playing at the Grand Old Opry and on Hee Haw. When he returned to the Gainesville, FL area he worked in sales throughout the remainder of his career. He never met a stranger and was always quick to share a smile and a word of encouragement. Beginning in the early 1990’s, the Ole Barn became his “home away from home” and he enjoyed participating in jam sessions playing his guitar and singing old country music songs. In addition to entertaining people there, he also played and sang at the Florida Credit Union. Hollywood was a loyal friend and enjoyed spending time with his dog, Jack, as well as cheering on the Florida Gators. One of his favorite sayings was “A quitter never wins and a winner never quits.” Larsen was preceded in death by his parents as well as his 10 brothers and sisters, Acie Tom Crocker (Effie); Alma Frank Crocker (Emmie); Obie Lamar Crocker (Geraldine); Hugo Rockwell Crocker (Grace); John Emory Crocker; Edith Crocker; Pearl Eatman (Bill); Ophelia Mund (Marvin); Mary Bell Tompkins (Eddie); and Clara Annie Tompkins. Larsen was also predeceased by his former wife and mother of his children, Mary Dell Ellis Keen; his wife, Mary Tomlinson Selin Crocker; and his wife Dorthea Seaton Crocker. He was also preceded in death by his stepsons Clarence Carl Selin, Jr.; George Thomas Selin; and Owen Jennings Bryant, Jr. He is survived by his step-son Gary Richard Selin (Ann); his daughters, Nancy Repogle (Reid); Peggy Brown (Orval); Kathy Stearns; his son Tommy Crocker; many nieces and nephews; 18 grandchildren; 30 great grandchildren; and 10 great, great grandchildren. The family wishes to express their deepest gratitude to the doctors, nurses and staff at the Gainesville VA Hospital as well as the entire team at the Cross City Nursing Home for their care and support. Graveside service will be held Monday, December 13, 2021, at 3:00 PM at Forest Meadows East Cemetery with Chaplain Andrew Buehner officiating. Following the service, the family invites all to join them for a gathering at the Ole Barn, 1791 NE 23rd Ave. In lieu of flowers, contributions may be made, in Larsen’s memory, to the Gary Sinise Foundation which serves our nation by honoring veterans, first responders, and their families. Donations may be made online at www.garysinisefoundation.org

Larsen Leroy Crocker, age 92, passed away peacefully at the Gainesville, FL. VA Medical Center, his stepson and stepson&#8217;s wife at his side, and went to be with his Lord and Savior December 8, 2021. Hollywood, as he was known to many of... View Obituary & Service Information

The family of Larsen Leroy Crocker created this Life Tributes page to make it easy to share your memories.

Larsen Leroy Crocker, age 92, passed away peacefully at the Gainesville,...

Send flowers to the Crocker family.