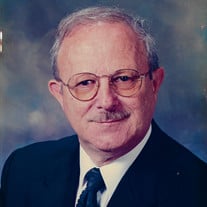 Larry Monroe Spears, age 79 of Gainesville, Florida died Thursday, July 2, 2020 at home surrounded by his loving family. Larry was born November 12, 1940 in Newtonsville, OH to Monroe and Dora Liming Spears. Larry loved his family and his work. He worked most of his life as an Insurance agent. He also served in the United States Army. Larry is of the Catholic faith and was a member of St. Patrick’s and Queen of Peace Catholic churches. Larry was regularly active in the Knights of Columbus and served for several years as their general agent. Larry was a member of St. Vincent de Paul, St. Patrick Gainesville Conference. He was also a member of the American Legion Post #16. In his leisure time, Larry loved to fish and shoot at the target range. Larry is survived by his loving wife, Betty Lynn Brown-Spears and son, Zachary Brown. He is also survived by six siblings, Terry Spears, Greg Spears, Rodney Spears, Brent Spears, Tammie Throckmorton, and Lori Black. He was preceded in death by his parents and a brother, Byron Spears. A Mass of Christian Burial will be held Thursday, July 9, 2020 at 2:00PM at St. Patrick’s Catholic Church 500 NE 16th Ave., with Fr. Lawrence Peck as celebrant. Interment will follow in Newberry Cemetery, Newberry, FL. For those who wish, in lieu of flowers, memorial contributions may be made to the Knights of Columbus, 500 NE 16th Ave., Gainesville.

The family of Larry Monroe Spears created this Life Tributes page to make it easy to share your memories.

Send flowers to the Spears family.