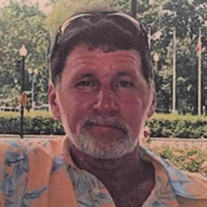 Kurt William Hentges, age 63 of Alachua died Wednesday, December 23, 2020. He was born July 11, 1957 in Gainesville. He is survivors his wife, Judy Hentges; brother, Eric Hentges (Sue); his sons, Zac Branciforte (Callie), Mitch Branciforte and Alexander J. Hentges; grandson, Hunter Branciforte, and numerous nieces and nephews He was preceded in death by his brother, Doug Hentges, and parents, James and Lavaun Hentges My father was a man who never met a stranger, it didn’t matter if you were homeless or an astronaut, he welcomed you with open arms. He was a carpenter, if you’ve been in Alachua awhile you might have sat on one of his tables. He was a good man, and he loved my Mom, My brothers and I dearly. My Father felt like he radiated a smile, riding around with him when I was a little kid, everywhere he went people knew him and greeted him warmly. He gave out wintergreen mints to people so often they knew to ask him if they wanted one. He wasn’t perfect in his life, especially early on but he always told me he went through the school of hard knocks so I didn’t have to. I can never thank him enough for the lessons he gave me, to the support he showed, to the good man he showed me how to be. In lieu of flowers, donations may be made to, An Epilepsy foundation, Florida Cancer specialists or a hospice facility of your choice.

The family of Kurt William Hentges created this Life Tributes page to make it easy to share your memories.

Send flowers to the Hentges family.