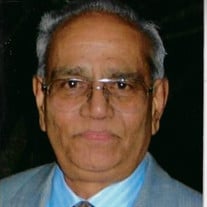 Kalipatnupu Siva Prasad (1936-2021) Born in Madras, India, Siva Prasad was the eldest son of Kalipatnupu Suryaprakasamma and Chalapathi Rao. He graduated as a Civil Engineer from the inaugural engineering class of the University of Madras. He began his career in the public sector of India. During his tenure, he oversaw major infrastructure projects in Eastern India including the second Hoogly Vivekananda Bridge approach, and major river crossings across the Mahanadi and Damodar rivers. He rose to the rank of Chief Engineer before immigrating to the United States in 1988. After arriving in the United States, he settled with his family in Florida and worked tirelessly in both the public and private sectors in the fields of environmental remediation, geotechnical investigation and building inspection. He retired in 2008 after 51 years, which included 17 years of professional work in the US, and settled in Gainesville, Florida. Prasad was a lifelong learner, studying to become a certified tax preparer to aid local families and worked as a Microsoft-certified beta-tester in his retirement. He is survived by Deepa, his wife of 61 years, his son Ananth, daughter-in-law Sunita and granddaughter Risha. He is also survived by his brother K. V. N Rao (Gurgaon, India) and numerous cousins, nieces, nephews, grandchildren and great-grandchildren. Prasad is remembered fondly as the ultimate caring and compassionate family man and friend. He never met a stranger and was always ready and willing to go above and beyond to lend a helping hand. He was active in his local South Asian community providing support and mentorship to newly immigrated students and families moving to Gainesville. He was known and loved for his passionate storytelling, and he leaves behind a rich legacy that will be celebrated by his family and friends. The family asks that, in lieu of flowers, please donate to the American Lung Association in honor of Prasad. If you’d like to notify the family of your gift, please use the following information: Deepa Prasad, 7945 49th Way, Gainesville, Florida, 32653.

Kalipatnupu Siva Prasad (1936-2021) Born in Madras, India, Siva Prasad was the eldest son of Kalipatnupu Suryaprakasamma and Chalapathi Rao. He graduated as a Civil Engineer from the inaugural engineering class of the University of Madras.... View Obituary & Service Information

The family of Kalipatnupu Prasad created this Life Tributes page to make it easy to share your memories.

Send flowers to the Prasad family.