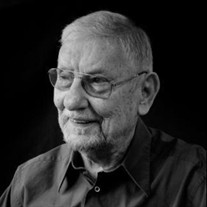 John Verne McKenzie was born on December 24, 1928 on a small farm in Fremont, Nebraska. His father, who his mother later said was out working all day in the rain, had passed away the previous May from pneumonia, and Verne was raised by his single mother Maggie and his older sister Vera. Later a tornado destroyed the outbuildings on the rented farm (but spared the house they were in) and the family moved into town. After high school he volunteered for and served in the army, which led to his utilizing the GI Bill to attend the University of Nebraska in Lincoln, where he served as Treasurer of his fraternity house to be able to afford his rent. He received a Business Administration degree, and on a blind date, he met the love of his life, Janet Zlomke, to whom he was subsequently married for 70 years. They had three children together, Michael, Sara, and Mary. He briefly attended Midland College in Fremont, and when his favorite basketball coach was fired, he quit the team, and transferred to Lincoln. He had some extra time over a Christmas break, so he completed both extra credit assignments (only one was required) for his accounting class, thus demonstrating his abilities in that field, and it was that professor who recommended him for his first job out of school. He later went on to work as a CPA for Peat Marwick and Mitchell in Omaha, then as an auditor for Litton Industries in Los Angeles. It was there in 1966 that Verne received a call from Warren Buffett, whom he had met in Omaha, offering him a job as Financial Officer for a recently acquired textile mill called Berkshire Hathaway in New Bedford, Massachusetts. Verne was proud to then work for nearly 30 years for Berkshire Hathaway and retired in 1992 as CFO, although he modestly referred to himself as “Warren Buffett’s bookkeeper.” He had a fine sense of humor and keen appreciation of life’s ironies. He often told of his time in the army, when he and 3 buddies were asked where they might want to deploy and were given several choices. One wanted to go to Europe, another to Colorado, the third somewhere else and Verne thought Hawaii would be great. When they reported back, they were told “Well, since you can’t decide, we’re sending all of you to Oklahoma.” He later said that decision probably prevented him becoming a career army officer. Having moved around quite a bit, Verne and Janet were happy to stay in Padanaram Village in Massachusetts for 8 years, and for the rest of their lives treasured the many friendships they started there. In 1973, the family moved back to Omaha, and Verne became one of the ten or so people in the central office of that storied corporation, Berkshire Hathaway. He was fond of recalling the early annual meetings, now huge annual events, but which at the time were held in the cafeteria of the insurance company across the street. Upon retirement, he and Janet moved to Chapel Hill, NC, then Naples, FL, and finally Gainesville, FL, where they lived for the last 17 years. Janet predeceased him by 10 months and he is survived by daughters Sara and Mary, son Michael, daughter-in-law Kari Floren, granddaughter Dana Skiseng, great granddaughter Fiona Skiseng, and many nieces and nephews. Verne passed away on March 6, 2022 at the age of 93. In lieu of flowers, the family asks that donations be made to the Red Cross.

John Verne McKenzie was born on December 24, 1928 on a small farm in Fremont, Nebraska. His father, who his mother later said was out working all day in the rain, had passed away the previous May from pneumonia, and Verne was raised by his... View Obituary & Service Information

The family of John Verne McKenzie retired CFO of Berkshire Hathaway created this Life Tributes page to make it easy to share your memories.

Send flowers to the retired CFO of Berkshire Hathaway family.