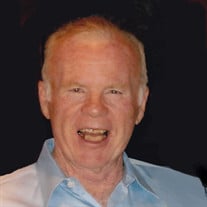 John Francis Stetson 81, of Gainesville, Florida passed away on September 20, 2020. John was born in Brockton, MA. to Francis and Marian Stetson on September 19, 1939. The family moved to St. Petersburg, Florida in 1949. John went to school at St. Petersburg High School where he played football, basketball, and baseball. He married Carole Hatfield on September 27, 1958, in St. Petersburg. He attended Southwestern University in Memphis on a football scholarship and later graduated from Memphis State University in 1962. He worked as an agent for Allstate for 35 years. He had several other careers afterward including a year in Indonesia with AIG Insurance and a year in St. Petersburg with ASI Insurance. He also developed several commercial buildings in Gainesville, Florida. John was preceded in death by his sister Dawn Livingston and his son Mark Todd Stetson. John is survived by his wife Carole Hatfield Stetson, his sister Tommie Stetson, daughter Cathy Barrios (Carlos), son Charlie Stetson (Jenny) and grandchildren Brandon Barrios, Carli Barrios, and Morgan Johnson (Joe). Rebecca Kathryn Stetson (Amelia). John is also survived by his cousin John McAvoy (Maria) and Cousin Marion Gorrell (Bruce). John loved his family and the City of Gainesville, which was his home for more than 50 years. He possessed a positive outlook on life and that included challenging those around him to be their best. Living in Gainesville he was a devoted Florida Gator football fan and had season tickets for many years. Later in life he traveled to almost all of the SEC Universities to see them play the Gators. John's love of nature and the outdoors led him to some of his favorite places including Manatee Springs, the Suwanee River, and the Gulf of Mexico for fishing and boating adventures. He hiked several sections of the Appalachian Trail and climbed Mt. Katahdin in Maine twice. A long-time golfer, John enjoyed playing at the Gainesville Golf and Country Club where he lived for many years. John never forgot his roots in the Northeast and traveled often to Boston to see his beloved Boston Red Sox and Maine where he and Carole had a summer vacation home. Family was always central and a big part of those trips. John was a firm believer that you should "sing before breakfast" and “when you smile, the whole world smiles with you". Although he will be missed we are grateful that he has touched many lives including family and friends with these simple positive ideas. A private celebration of his life will be held when appropriate. In lieu of flowers the family asks that gifts be given to Haven Hospice, in memory of John Stetson. Please designate Gainesville ET York Care Center 4200 NW 90th Blvd. Gainesville, FL. 32606.

John Francis Stetson 81, of Gainesville, Florida passed away on September 20, 2020. John was born in Brockton, MA. to Francis and Marian Stetson on September 19, 1939. The family moved to St. Petersburg, Florida in 1949. John went to school... View Obituary & Service Information

The family of John Francis Stetson created this Life Tributes page to make it easy to share your memories.

Send flowers to the Stetson family.