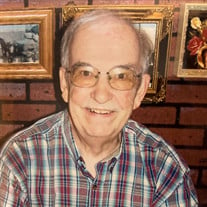 John R. Ritter, 86, passed away peacefully on January 1, 2022 in Gainesville, FL. John was born in Eveleth, Minnesota on September 5, 1935 to John and Eunice Gossman Ritter. He graduated from Eveleth High School in 1953, Eveleth Jr. College in 1955, and South Dakota School of Mines and Technology in 1958 with a B.S. in Geological Engineering. He worked in Venezuela for the Creole Petroleum Corporation for 2 years. He worked in Casper, Wyoming as a hydrologist for the U.S. Geological Survey (USGS). After he received a Master’s Degree in Oceanography from the University of California at San Diego in 1963, he returned to work as a hydrologist with the USGS. In his career, he worked in Sacramento and Menlo Park, CA, Harrisburg, PA, and Albany, NY. His expertise in river sediment resulted in work at Mt. St. Helens soon after the volcano erupted. He retired in 1995 after 32 years. In 2006 he moved to Gainesville. He will be remembered for his great sense of humor, love of nature, passion for travel and learning which included taking conversational Spanish classes and other classes at the Institute for Learning in Retirement. He served as President of the Friends of the Library in Clifton Park, NY and in Gainesville. He was an avid reader and collector of bookmarks. He is survived by his wife of 61 years, Judith (Johnson) Ritter, his two daughters Allison Cunningham (Brett) of Gainesville, FL and Amy Ritter of Leesburg, VA, two granddaughters Lauren and Anna Cunningham; as well as many cousins, nieces, nephews, and friends. A memorial service in Virginia, Minnesota will be conducted at a later date. Donations may be made to Trinity United Methodist Church-Missions at 4000 NW 53rd Avenue, Gainesville, FL 32653 or Friends of the Library at 430 N. Main St., Gainesville, FL 32601.

The family of John R. Ritter created this Life Tributes page to make it easy to share your memories.

Send flowers to the Ritter family.