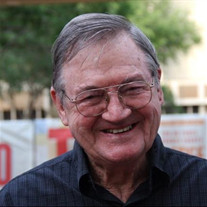 John Kirk McDonald, former Coral Gables attorney, Navy aviator, educator and longtime community volunteer, died on January 3, two months shy of his 90th birthday, in Gainesville, Fla. Kirk was a true gentleman known for his kindness and quick wit. Born in Parma, Ohio (a suburb of Cleveland), he graduated Holy Name High School and Miami University in Oxford, Ohio. He served as a Navy aviator, earning the rank of Lt. JG before moving to Miami in 1956 with his wife Gloria E. McDonald. While attending night classes at the University of Miami School of Law, he was among the first teachers at Southwest Miami High School. He practiced law in Miami for 41 years: first as a member of the firm, which included Congressman Dante Fascell as a partner and then on his own at the Coral Gables Law Center. He was the past president of the Coral Gables Bar Assn., the Coral Gables Jaycees and the legal counsel for the Junior Chamber International. An active retiree to his very last day, he and Gloria first retired to St. Augustine, where he played golf to his heart’s content. The couple was among the founding residents at Oak Hammock at the University of Florida, a continuing care retirement community. His love and commitment to family, even during the toughest of times, was unwavering. His easygoing accepting manner will be missed; he could always be counted on for a well-told story or classic joke. He was never afraid to try new things (except vegetables); he traveled extensively, visited every state and across Europe and the Americas. He lived a rich and varied life with an insatiable curiosity and interest in others, the world around him and the universe. Survivors include daughter Katherine Anne of Los Angeles (her partner Jeff Kirshbaum); son John Kirk Jr. of Coral Gables; his loving companion Eileen Mullady Smith of Gainesville and grandsons Martin and Colin Hirshland. His son James F. McDonald remains a missing person and was declared dead. His wife of 63 years, Gloria, predeceased him. A mass of Christian burial will be held at St. Augustine Church, Gainesville on Tuesday Jan. 12 at 10 a.m. Donations in John Kirk McDonald’s honor can be made to: The Friends of Paynes Prairie https://www.prairiefriends.org/.

The family of John Kirk McDonald created this Life Tributes page to make it easy to share your memories.

Send flowers to the McDonald family.