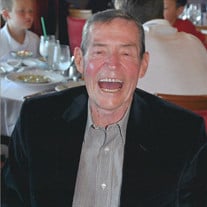 John Stanley Dean, 85, of Gainesville, FL passed away September 8, 2021 surrounded by his family. Stan, as he was known by his friends, was born July 20, 1936 in Montreal, Canada. He emigrated to the United States in 1956 and proudly served in the United States Air Force. He became a United States citizen and moved to Fort Lauderdale, FL in 1960 where he eventually worked for Bell telephone, rising into management. He transferred to Gainesville, FL in 1980 where he continued his career with the telephone company until his retirement in 1994. Stan adored and was dedicated to his family, and was a loyal friend. He enjoyed a glass of wine or a cold beer, cheering on the Florida Gators, going on cruises, and was a voracious reader. Stan was preceded in death by his parents, John Stanley Dean and Inez Dean, and his sisters Inez Brimble, Gwenneth Mercer, and Lois Nehring. He is survived by his beloved wife of 65 years, June Rose Dean, his children and their spouses, Greig L. Dean (Bok J. Dean) and Dr. Glenn S. Dean (Dawn M. Dean), his grandchildren and their spouses Jeffrey C. Dean (Carolyn Dean), Julie Dean Kendall (Ronald Kendall) and Nash T. Dean, his great grandchildren Riley Kendall and Story Dean, and his nephew Leonard Mercer (Ann Mercer) and nieces Wendy Auger, Lynn McNamara, and Lee Harrah. Funeral services will be held Thursday, September 16, 2021 at 2:00 PM with military honors at the Florida National Cemetery at 6502 S.W. 102nd Avenue Bushnell, FL. In lieu of flowers, please consider a donation in Stan’s memory to the American Cancer Society or the American Heart Association.

John Stanley Dean, 85, of Gainesville, FL passed away September 8, 2021 surrounded by his family. Stan, as he was known by his friends, was born July 20, 1936 in Montreal, Canada. He emigrated to the United States in 1956 and proudly served... View Obituary & Service Information

The family of John Stanley Dean created this Life Tributes page to make it easy to share your memories.

Send flowers to the Dean family.