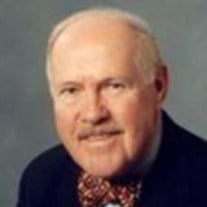 John Ryckman Bonner, Sr. passed away peacefully on July 2, 2021, after courageously battling both sepsis and a bone infection for two- and one-half months. He is predeceased by his parents, his two brothers, and his first wife, Jane. John was born in Greenwich, Connecticut on May 24, 1929, to Edith and George Bonner. The Bonners, including John and his brothers, Frank, and David, moved to Florida in 1938 after the Great New England Hurricane and over the years lived in Clearwater and Dunedin. He attended Clearwater public schools and the Florida Military Academy. He enrolled at the University of Florida in 1946 at age 16, graduated with a BA with high honors in June 1949, and graduated from the University of Florida Fredric G. Levin College of Law in September 1950. In Gainesville, a Fall Frolic blind date with Jane Brownfield led to romance and then marriage in April 1950. Shortly after graduation, John and Jane moved to Clearwater, Florida where he was first hired as an Associate Attorney at Baker and Baker Law Firm, and then hired by Bill Wolfe as an Associate Attorney at Wolfe, Whiteman, and Rowe Law Firm. John and Jane welcomed their daughter, Janice, in 1952 just before moving to Montgomery, Alabama where he was called to active service in the U.S. Air Force. He served as the Base Legal Officer in the Judge Advocate General’s Department at Maxwell Air Force Base for two years until receiving his honorable discharge when his parents became ill. After returning to Clearwater, John and Jane welcomed John Ryckman Bonner Jr. (Ryck) in 1954, and John moved to Partner and then Managing Partner in the well-known Clearwater law firm of Wolfe, Bonner, and Hogan for 34 years. Jane passed away in 1984, and John was blessed to find another true love, Nancy Wallace, who he married in 1985. John and Nancy lived in Clearwater, Highlands, North Carolina, and Charlotte, NC until moving permanently to Alachua, Florida six years ago. They were married for 36 years during which time John was a loving father for Nancy’s two children. John was a well-known attorney who specialized in Elder Law, Wills, Trust and Estates, Probate, Corporation and Banking law, and Government Law. His legal accomplishments brought him an “AV” peer rating by Martindale-Hubbell, he served as a Municipal Judge for the City of Clearwater for 5 years, as Town Attorney for the Town of Largo for 15 years, as Town Attorney for the Town of Belleair for 6 years, as Chairman of the Clearwater Bar and the Florida Bar Association Grievance Committees, as a founding member and President of the Florida Municipal Judges Association, as a Director of Attorney Title Services, and as Chairman of the Florida Bar’s Client Security Fund. John was a member of the Clearwater Bar Association, the American Bar Association, and the Florida Bar Association for 53 years. His bar number had only 4 digits! At the time of his death, he still practiced law on a pro bono basis at the University of Florida Law Center. He was admitted to practice in the Federal District for the Middle District of Florida, in the United States Court of Appeals - Fifth Circuit, in the United States Court of Appeals, Eleventh Circuit, in the Supreme Court of the United States, in the Tax Court, and in the Board of Immigration Appeals and the Immigration and Naturalization Service. His charitable endeavors in Clearwater were many and included the Board of Trustees of First United Methodist Church, Director of the National Safety Council, Pinellas Chapter (where he organized and taught traffic safety school which was coordinated with and sponsored by the American Bar Association Traffic Court Program and the National Safety Council) which led to his receiving the National Safety Council President’s Award in 1980 and their Torch Award in 1986, President of the Clearwater Lions Club, Chapter Chairman of the Upper Pinellas County American Red Cross and Vice Chairman of the Clearwater Junior Chamber of Commerce. One of his volunteer efforts deserves special mention. In the 1960s, John and Jane served on the Board of the Clearwater Concert Association, whose purpose was to host four classical concerts per year at the Clearwater High School auditorium. It was obvious to them and fellow concert goers, that Clearwater needed its own concert venue when the Florida Gulf Coast Symphony (now The Florida Orchestra) started plans to perform, and John and Jane came up with an idea…One of John’s clients, June Baumgardner, wanted to donate many acres of land that she owned, and he proposed to her that she donate the land with the restriction that a performing arts center be built on the land and that construction must start within two years. She donated the land, a dedicated group of community leaders raised the money, and today the Baumgardner Center for the Performing Arts and Ruth Eckerd Hall serves as a tribute to all of those efforts. John is survived by his daughter, Janice Bonner Case (husband James), grandchildren Julia Case Miller (husband Jeff) and James Bennett Case (wife Hilary), great-grandchildren Jordan Lee Miller, Jennifer Daly Miller, James Bennett Case, Jr., and Anne Davis Case; his son, John Ryckman Bonner Jr (wife Lynn), grandchildren Sarah Lynn Bonner, John Ryckman Bonner III (wife Harmony), Emily Bonner Bludov (husband Vlad) and great-grandchildren John Ryckman Bonner IV, Ruth Lynn Bonner and Mila Rose Bludov, daughter Ashley Bonner Tully (husband Brent), grandchildren Spencer Ryckman Tully and Cameron Lee Tully; and son Thomas Howard Royster (wife Melinda) and grandson Blake Wallace Royster. A celebration of Life will be held on August 7 at 10:00 a.m. at the Trinity United Methodist Church in Gainesville, Florida. . In lieu of flowers the family requests that donations be made to the Cashiers Highlands Humane Society

John Ryckman Bonner, Sr. passed away peacefully on July 2, 2021, after courageously battling both sepsis and a bone infection for two- and one-half months. He is predeceased by his parents, his two brothers, and his first wife, Jane. John was... View Obituary & Service Information

The family of John Ryckman Bonner Sr. created this Life Tributes page to make it easy to share your memories.

Send flowers to the Bonner family.