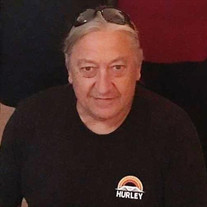 John Eric Bingham left this earth on January 2, 2022, in Gainesville, FL. He was born on July 13, 1966, in Columbia, Missouri to Dr. Hal, and Mary Ann Beal Bingham. During his childhood, he spent time traveling with his parents, three sisters, and brother to various places throughout the United States. In 1972, his family moved to Gainesville, FL. He attended Glen Springs Elementary, J.J. Finley Elementary, Westwood Middle, and Gainesville High School. He participated in Boy Scouts troop #376 and was on the drumline during his years at GHS. After graduating from high school, he attended Santa Fe College and played in various bands in and around the Gainesville area. Eric was a part of the 6th Street Rhythm and Blues band that won the Blues Challenge and represented Gainesville in Memphis, TN on Beale Street, 2 years in a row. He was proud and honored to be the Graphic Designer for his father’s books, including the biography of Mary Ann Beal Bingham and the autobiography of Hal Bingham, and Son of Bitche, memoirs of a foot soldier in WWll. Preceding him in death are his parents Hal, and Mary Ann Bingham, and a daughter, Candace Taylor. He leaves behind to mourn his death two sons, Nathan, and Jacob; three sisters, Catherine, Lyn (Emory), Shaun (Hans); and his brother Steve (Trudy); as well as many cousins, nieces, nephews, and friends. A celebration of John’s life will be held on February 5, 2022, at 2:00 PM in the worship center at Trinity United Methodist 4000 NW 53rd Ave. with Reverends Catherine and Steve Price officiating. Following the service at Trinity, please join family and friends at Lillian’s Music Store in downtown Gainesville for a Celebration of life jam, beginning at 4 PM. In lieu of flowers, donations may be made in Eric and his daughter, Candace’s memory to the Susan Komen Foundation at www.komen.org.

John Eric Bingham left this earth on January 2, 2022, in Gainesville, FL. He was born on July 13, 1966, in Columbia, Missouri to Dr. Hal, and Mary Ann Beal Bingham. During his childhood, he spent time traveling with his parents, three sisters,... View Obituary & Service Information

The family of John Eric Bingham created this Life Tributes page to make it easy to share your memories.

Send flowers to the Bingham family.