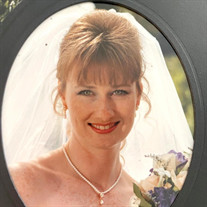 Jennifer Elaine Rollins, an unsurpassed daughter, sibling, wife, mother, manager, and friend to many passed into eternity on October 4, 2021, after an 18-month battle with metastatic breast cancer. Jennifer was born on January 14, 1968, one month premature, to Arnold and Victoria Bradeen at St. Joseph’s Hospital in Bangor, Maine. As a U.S. Coast Guard family, they moved to new stations frequently and Jennifer had memories of king crabs in Alaska, tornadoes in Oklahoma, and school days in Boston before settling in Windham. Jennifer grew up with her siblings Stephanie and Aaron doing gymnastics, skipping stones, and going “up-ta-camp” in the Maine summers. After high school, she soon had a lovely daughter, Christina Nicole Mellen. She earned an Associate degree in accounting, after which she and Christina moved to Broward County, Florida. Working at a construction firm, she was transferred to the Ocala area, where she met her husband John Walter Rollins on May 12, 2000. John and Jen were wed on October 27, 2001, in Gainesville, with Christina at the altar as well. John and Jen had two amazing children, Alden James in 2002 and Laura Kathryn in 2004. While the family lived in Tallahassee, Christina was tragically lost in an automobile accident in 2008. After moving to High Springs and raising children full-time for many years, Jen returned to her studies and was working toward her Bachelor of Science in Accounting at Santa Fe College in Gainesville when she was diagnosed with cancer. She was also an avid Choi Kwang Do martial artist. Jen fought the aggressive disease for nearly 18 months, inspiring countless people along the way. She lived by example rather than words, making friends everywhere she went while studiously avoiding becoming the center of attention. She also lived a life of faith, accepting salvation from Christ at age 12 and helping John return to Christianity with salvation and baptism just this year. Jen loved Christmas, Disney characters and parks, crafts, thriller and romance novels, hip-hop dancing, cozy home comforts, hiking outdoors, and decorating each change of seasons. She was reluctant to speak until prompted when suddenly the stories flowed out. She was the most reliable, committed, and loving wife and mother one could imagine. Jen is survived by her sister Stephanie Bradeen, brother Aaron Bradeen, husband John, children Alden and Katie, and numerous extended family in Maine. A memorial for Jen will be held Sunday, October 10, 2021, at 1 PM Eastern at Williams-Thomas Westarea Funeral Home, 823 NW 143rd St, Newberry, FL 32669. In lieu of flowers, please send donations to Grace at Fort Clarke United Methodist Church, specifically for the Stephen Ministry, a national organization with local chapters offering one-on-one faith-based counseling for those in need.

Jennifer Elaine Rollins, an unsurpassed daughter, sibling, wife, mother, manager, and friend to many passed into eternity on October 4, 2021, after an 18-month battle with metastatic breast cancer. Jennifer was born on January 14, 1968, one... View Obituary & Service Information

The family of Jennifer Elaine Rollins created this Life Tributes page to make it easy to share your memories.

Send flowers to the Rollins family.