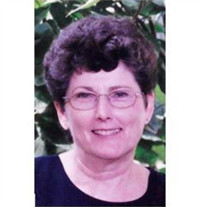 Jean Dorothy Freund Wilson October 12,1939 - December 24, 2020 Jean Dorothy Freund Wilson of Gainesville, Florida passed on Christmas Eve of 2020. She was preceded by her beloved husband of 46 years, Harold D. Wilson. She leaves behind her brother, Charles, her eight children, and an ever-growing number of grandchildren and great-grandchildren. Jean was born in Baltimore, Maryland in 1939, to Charles and Ora Freund. As a child, she loved to spend time down at the shore house on weekends, where she water-skied and fished. She taught all her kids how to fish and crab. She also loved performing, and was a talented singer and dancer. Jean's first husband was the late Dr. Irving “Dick” Hawkins. They were married in Baltimore, Maryland. Together they welcomed three children: Mark, Jeff, and Kim. Jean supported the family while Dick completed military service and medical school. In 1973, Jean met and married the love of her life, Harold D. "Hal" Wilson, a pharmacist for Eckerd Drugs. They were introduced by a mutual friend, Barbara Lawrence. Hal had four children, Kimberli, Randall, Darrell, and Priscilla from his first marriage to Priscilla Normandy. Jean and Hal settled into her home just west of Gainesville and blended their families. Jean would often affectionately refer to the new family of nine as “The Brady Bunch.” They plugged in a second refrigerator, purchased eggs by the dozens at a local farm and bought milk ten gallons at a time. Together, Hal and Jean were soon blessed with a child of their own. They named the baby after Hal’s father, Christopher. After their children left home, Mama Jean and Papa Hal were generous in making time and space for the constant flow of children, grandchildren and great-grandchildren. Mama Jean was known as everyone's Mom. Hers was the home where neighborhood kids wanted to hang out, and where she babysat virtually all of her grandchildren. Their home was a hub for a daycare business she operated for many years. Mama Jean welcomed everyone with open arms, and the Wilson family had many reasons to celebrate and gather for special occasions and holidays. Hal and Jean spent many peaceful evenings together sitting on their porch enjoying cocktails and each other's company as they watched bats flitter and counted the planes that passed overhead. Jean Dorothy Freund Wilson is survived by her children Mark Hawkins (Becky), Jeff Hawkins (Bonnie), Kim Kazmin (John), Christopher Wilson (Stacy), her stepchildren Kimberli Webb (Greg), Randall Wilson, Darrell Wilson, Priscilla Wise, and an ever-growing number of beloved grandchildren and great grand-children. She is missed. In lieu of flowers, the family requests that memorial contributions may be made to the Haven Hospice E.T. York Care Center, 4200 NW 90th Blvd. Gainesville, FL. 32606, www.havenhospice.org

The family of Jean Wilson created this Life Tributes page to make it easy to share your memories.

Send flowers to the Wilson family.