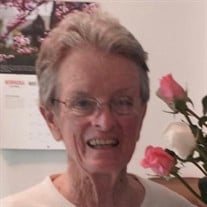 Janet Zlomke McKenzie died peacefully in her sleep at the Oak Hammock Retirement Community in Gainesville, Florida on May 8, 2021. Her devoted husband of 70 years, John Verne McKenzie, and daughter Sara Jane McKenzie were at her side. She was born on February 19, 1931 to George and Laura May Southard Zlomke in Grand Island, Nebraska and was raised in the nearby small town of St. Paul, Nebraska where her father operated Zlomke Furniture Store for more than 40 years. She graduated from St. Paul High school in 1948, and had her diploma presented to her by her father in his role as President of the School Board (he was also Mayor of the town, and President of the Howard County Fair Board – somebody had to do it). Janet enrolled at the University of Nebraska in Lincoln, majored in Chemistry, became a member of Kappa Delta Sorority, and received her Bachelor’s degree in May 1952. She and her husband met on a blind date in January 1950 and were married on May 31, 1951. They raised three children who survive her: Michael John (New York City), Sara Jane (Santa Fe, New Mexico) and Mary Margaret (San Diego, California), additionally many nieces and nephews survive. After staying at home to raise the children, Janet earned a certificate as a Medical Technologist and practiced that profession for several years before becoming a fine-Arts-photographer. She loved birds, the shells from Sanibel Island, and had an unbelievable short game in golf. She was predeceased by her parents, her brother, Clayton Zlomke, and her sister, Georgia May Zlomke Calvin. While her elder years were challenged by Alzheimer’s disease, those who knew her then will remember her cheerful disposition and her singing voice. Janet pre-arranged that her body be donated to scientific research, thus there will be no viewing. A small reception for friends and immediate family will be held for her at her residence in Gainesville, FL, on May 17. In lieu of flowers, the family requests contributions be made to the Alzheimer’s Association of Alachua County, FL.

Janet Zlomke McKenzie died peacefully in her sleep at the Oak Hammock Retirement Community in Gainesville, Florida on May 8, 2021. Her devoted husband of 70 years, John Verne McKenzie, and daughter Sara Jane McKenzie were at her side. She... View Obituary & Service Information

The family of Janet Zlomke McKenzie created this Life Tributes page to make it easy to share your memories.

Janet Zlomke McKenzie died peacefully in her sleep at the Oak...

Send flowers to the McKenzie family.