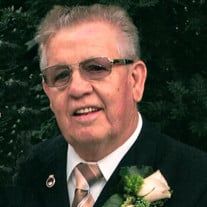 Jan Martensen of Archer died Sunday, December 13, 2020, in Gainesville, Florida. He was predeceased by his parents Andreas Martensen and Josine Roeloffs. He is survived by his wife Annegrete Martensen, sons Fred Martensen (Helena) of Tampa, Erik Martensen (Mandy) of Palm Bay and Pete Martensen of Archer and four grandchildren, Brenden, Katarina, Alexei and Landon (mother Sherry Vaughan). He is also survived by brothers, Joergen, Benno and Andreas Martensen and sisters, Ingke Schniedewind, Lene Mertmann, Christine Kahlstadt and Inge Mueller. Jan Martensen was born December 13, 1942, on the island of Föhr “Insel Föhr”, a North Friesian island on the German coast of the North Sea. It can only be accessed by ferry or by air. His family of 14 children had a farm in the village of Süderende and lived in a Frisian style house with a straw-thatched roof. This home is now a historic landmark on the island. They often spoke Fering, a dialect of the North Frisian language. He attended school in a one-room schoolhouse where he excelled in math which would be later helpful with business. He rode horses to complete in the sport of “Ringreiten” ring riding where riders show their skills by collecting metal rings with a lance while at a gallop. At just age 16, Jan left the island and traveled to America on a boat to work with his brother Ernie in a deli in New York. Soon he met Annegrete Wrieden at the German Dance Hall in Franklin Square; she came to New York from Mintenberg, Germany. Even though she was 19, Jan had to ask Anne’s brother Hans for permission to date her. They married and started a deli business, Martensen Deli. While working full time, they raised their family of three boys and supporting their boy scouting, track, and soccer activities. After 24 years, they followed the family and warmer weather south to Archer in central Florida. They bought a home and farm while he worked at local grocer Kash n’ Karry. Jan raised beef cattle, goats, sold hay, and continued to do so after he retired. Jan was a happy, welcoming man, outgoing on the dance floor, singing his island anthem and German songs, and quick to offer you a shot of Jägermeister. He loved all sports, especially the New York Jets and the German soccer “Fußball” team. Germany was never far from his heart, and he and Anne traveled every year they could to visit their homeland and families. Their three sons grew to love Germany as well and visited family, castles, marzipan factories, beautiful summer garden houses, the autobahn, and experienced walking from Föhr to the neighboring island of Amrum when the tide was out. Recently, Jan’s health and vision faltered, and Anne stayed by his side to care for him….they celebrated 57 years of marriage. He passed on his 78th birthday surrounded by family singing Happy Birthday in English and German. The family is incredibly grateful for the assistance and support they received from Haven Hospice. No service is currently planned, but when the Covid 19 virus subsides, a Celebration of Life will be scheduled. In lieu of flowers, memorials may be made in his name to Kidney foundation at www.kidney.org or Haven Hospice www.beyourhaven.org

Jan Martensen of Archer died Sunday, December 13, 2020, in Gainesville, Florida. He was predeceased by his parents Andreas Martensen and Josine Roeloffs. He is survived by his wife Annegrete Martensen, sons Fred Martensen (Helena) of Tampa,... View Obituary & Service Information

The family of Jan Martensen created this Life Tributes page to make it easy to share your memories.

Send flowers to the Martensen family.