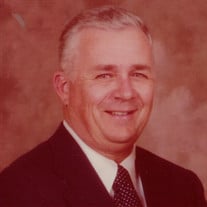 James Philip Stambaugh, Sr., 92, a longtime resident of Gainesville, Florida, died Sunday, April 25, 2021 at his home, following a long illness. Mr. Stambaugh was born September 16, 1928 in Scottdale, Pennsylvania to the late William and Irma Stambaugh. He was raised in St. Petersburg, Florida and graduated from St. Pete High, Class of 1946. After graduation, he enrolled into the University of Florida where he was a member of Alpha Tau Omega fraternity. He also joined the ROTC program and graduated with a Bachelor’s degree in Education in 1951. He was then commissioned into the U. S. Air Force and began a 20 year career as a helicopter pilot, serving all over the world and at home — Saudi Arabia, Germany, Vietnam as well as Maine, Florida and Texas where he completed his military career, serving as the Squadron Commander over helicopter instructors at Shepard AFB in Wichita Falls. Following his retirement from active duty in 1970, he moved with his family to Gainesville, and then began a long career as a securities consultant before retiring again in 1998. Mr. Stambaugh had a heart for serving his community in many various ways, from giving blood, to helping to serve the homeless, to involvement in civic organizations, such as the Gainesville Kiwanis Club. He was also a member of the Gainesville Quarterback Club and the Gainesville Orchid Society. He was preceded in death by his wife of 48 years, Sylvia Davis Stambaugh in 2002. Mr. Stambaugh is survived by his son and daughter in law; James Philip “Phil” (Renee) Stambaugh, Jr., of St. Augustine; along with several nieces and nephews. Mr. Stambaugh will be interred alongside his wife in Memorial Park Central. In lieu of flowers, please consider memorial contributions to Community Hospice, 4011 NW 43rd St., Suite B, Gainesville, FL 32606.

The family of James Philip Stambaugh Sr. created this Life Tributes page to make it easy to share your memories.

Send flowers to the Stambaugh family.