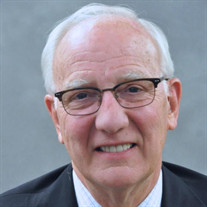 Jim Korner – mentor, coach, musician, astute leader, gentle listener, devoted husband, and consummate friend – passed away on September 6, 2021. Born July 30,1949, in Shadyside, Ohio, he is survived by his wife of 42 years, Barbara Korner; brother Tom Korner (Toni Notaro); nephews Bill, Luke (Kalee), and Ryan (Jessica) Korner; grandnephews Andrew, Bennett, Kashton, Robert, and Maxwell; and grandniece Lydia. He is preceded in death by brother William Korner and parents Finley and Lula (Powers) Korner. He leaves a host of friends and colleagues he has mentored and encouraged. Jim’s determination to overcome physical challenges began when he fractured his neck in a swimming accident at age 17 and spent 92 days on a frame with weights on tongs attached to his skull. Emerging from this trauma with his mobility intact, the gregarious pianist and baton twirler developed a high level of confidence, persistence, and deeper faith. “The filters came off,” revealing a courageous spirit and sense of humor that enlivened all his professional and personal interactions for the rest of his life. Jim’s integrity, compassion for others, and commitment to honoring Christ meant that he was among those rare individuals who need few filters because their heart is in the right place. Jim’s capacity for leadership developed during the high school years when, as drum major, he led and directed the Shadyside High School Marching Band. His skill at twirling awed many; and, when he went back for a band reunion 30 years later, he was still fascinating the football crowd as they watched his baton soar above the others. While earning a degree in music education at Ohio University, he worked in the dining halls and nurtured his love for cooking. When he finished his degree, he joined Bob Evans at the original farm restaurant, becoming a favorite of the founder. In 1972, he returned to his alma mater and became part of OU’s dining services management team. In 1979, he married the love of his life, Barbara Oliver, and they began a partnership that had an impact on higher education and church worship programs around the country. His path of promotions, awards, and increasing responsibility evolved throughout his career as Jim’s portfolio expanded beyond dining into student and business services--at Ohio University, the University of Missouri, Seattle Pacific University, VA Hospital Brain Rehabilitation Research Center (Gainesville, FL), and Penn State University. In each instance, Jim’s visionary leadership combined with his extraordinary ability to assess challenges, communicate effectively, and establish positive relationships with others, led to continuous advancement. Through forty years of active involvement in the National Association of College and University Food Services, Jim initiated innovations in the campus dining industry. He won multiple awards, served as president for two different regions, and was elected national president for 1999-2000. He prioritized fostering relationships among nearly 1,000 campus and industry members and championed volunteer opportunities. Jim believed in the power of learning to change lives and encouraged others in their educational pursuits. At the University of Missouri, he established an incentive program for food service workers to complete their GED high school diploma. He enjoyed teaching the institutional food service class for several years at Penn State University, taking students on field trips to hospitals, large corporate operations, and even prison dining services. His personal commitment to continuing education guided him to earn his MBA from Webster University in 2004. He persuaded others of the value of lifelong learning as assistant vice president for Outreach at Penn State where he oversaw the division of Professional and Community Education. Music was integral to every aspect of his life. Starting piano as a young child, he continued to play throughout the years, using his skills for professional organizations and churches. He served as choir director, pianist or organist at several churches, including Trinity United Methodist in Gainesville. In addition to his quick wit that left all who knew him laughing, Jim’s trademark was singing. People always knew where Jim was in the building because they could hear him singing. Recently, Jim had surgery to repair a torn knee tendon. He thanked his surgeon, who visited him the next day. The doctor told Jim that he had surprised the anesthesiology team. When people are sedated for surgery, inhibitions are gone and many cry, get restless, or become belligerent. Instead, Jim started singing. The doctor commented that this was a sign to everyone that all is well with Jim’s soul. As his family and friends surrounded him through three comforting days of singing, love, and laughter, all remained well with Jim’s soul. Mouthing words to favorite scriptures, directing our hymn-singing with his right arm, creating joy with his wit, and expressing his gratitude to the Shands Cardiac ICU nurses and doctors, he slipped into eternity. Among his final words were, “God is still on the throne. His grace is sufficient. God will give me strength.” A Celebration of Life will be held on Saturday, October 16, 1:00 p.m. at Trinity United Methodist Church, Gainesville, FL; livestream at trinitygnv.org/funerals. Memorial gifts may be directed to the Barbara and James Korner Open Doors Scholarship online at: raise.psu.edu/KornerScholarship Or by check payable to Pennsylvania State University at Donor and Member Services; 2583 Gateway Drive; Bristol Place One, Suite 130; State College, PA 16801.

The family of James Richard Korner created this Life Tributes page to make it easy to share your memories.

Send flowers to the Korner family.