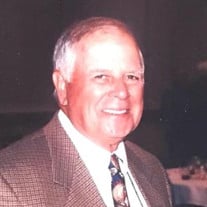 James “Jim” Parrish passed away peacefully after a brief illness into the arms of his Lord and Savior on October 17, 2021 in Gainesville. Jim was born July 31, 1933 in Red Star WV to Jess F and Louise Rodehaver Parrish. As a young boy he enjoyed playing in the woods and creeks around his home. One of his responsibilities as a young man was to cut the grass for his mother. On one such occasion after being told not to start the mower without the help of his mom, he did so anyway. As a result he lost the tip of one finger. When the grandchildren would inquire, as curious children always do, he would explain it was the result of “candy rot” and that if they ate too much candy it would happen to them as well. Jim was active in scouting and earned the rank of Eagle Scout - an accomplishment for which he was very proud. He led his life always following the Scout Oath. Jim graduated from Virginia Polytechnic Institute or as known today, Virginia Tech in Blacksburg, VA. Jim was a member of Hague United Methodist Church where he attended with his son Jimmie. He was an avid Gator fan and was involved in many different booster groups. He attended football, baseball, basketball, volleyball, gymnastics, lacrosse, softball and any other athletic event that required orange and blue attire. His biggest blessings in life were his family and friends. He never met a stranger and was always quick to share a smile and a word of encouragement. Left to cherish his memory is his wife of 68 years - Betty, his three children, Jimmie of Alachua, Cindy Riggs (Larry) of Huntsville, AL and Susan Howard (David) of Waxhaw, NC. Six grandchildren Coleman Riggs, James Riggs, Elizabeth Howard, Laura Howard, Sarah Howard and David Howard, Jr. and three greats - Parrish Riggs, Preston Riggs and Nahla Riggs; and a brother, Mack. The family wishes to express their deepest gratitude to the doctors and nurses at North Florida Regional Hospital and to the staff at Haven for their care, love and support. A memorial service will be held Friday, October 22, 2021 at 11:00 a.m. in the chapel of Williams-Thomas Downtown. A reception will follow. In lieu of flowers, donations may be made to Haven Hospice, beyourhaven.org/donate.

James &#8220;Jim&#8221; Parrish passed away peacefully after a brief illness into the arms of his Lord and Savior on October 17, 2021 in Gainesville. Jim was born July 31, 1933 in Red Star WV to Jess F and Louise Rodehaver Parrish. As a young... View Obituary & Service Information

The family of James "Jim" Parrish created this Life Tributes page to make it easy to share your memories.

James “Jim” Parrish passed away peacefully after a brief illness...

Send flowers to the Parrish family.