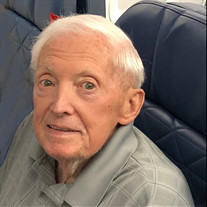 James Luther Gordinear, 80, longtime resident of Hartland, Michigan, died on Tuesday, April 6, 2021 in the Shands Hospital at the University of Florida, Gainesville, Florida. Mr. Gordinear was born on February 1, 1941 in Detroit, Michigan to the late Irving and Louise Gordinear. He lived most of his life in Hartland, a veteran of the United States Navy serving in the signal corps decoding morse code. After serving in the Navy, he spent 32 years working as an employee assistance representative for General Motors until his retirement in 2000. After his retirement, Jim enjoyed traveling, playing golf, fishing, and cruising with his late wife Ihlene, who preceded him in death in 2018. They were together for over 58 years. Following his retirement, spending their winters at their home in Florida, the Gordinear family began a tradition of celebrating “Thanks-mas”. Everyone would get together in mid-October for a big turkey dinner and exchange gifts, creating their own holiday before leaving Michigan for the winter. Jim will be remembered by friends and family for his humor and quick wit. He was a 32nd Degree Mason in Detroit and a member of Alcoholics Anonymous. One of the things he was most proud of was nearly 44 years of continuous sobriety, serving as a sponsor and mentor to a vast number of recovering alcoholics. Also preceding him in death was his brother, David Gordinear. He is survived by his three daughters, Shelley Gordinear and Laura (Michael) Messner, both of Hartland, and Jenifer (Corey) Reese, of Linden; one sister, Annetta Lind, of Farmington Hills; five grandchildren, Mitchell and Marcus Reese, Zachary and Emily Messner and Blaine Bogdanski; one great granddaughter, Kennedy Bogdanski. A memorial celebration of Jim’s life will be held at a later date and his interment will follow along with Ihlene in Hodge Cemetery in Hartland. In lieu of flowers, please consider making a donation to the Parkinson’s Foundation, 200 SE 1st Street, Suite 800, Miami, FL 33131. Please visit his memorial page at: www.williamsthomasfuneralhome.com to sign the online guest register and to check for updates regarding the day and time of the memorial, once announced.

The family of James Gordinear created this Life Tributes page to make it easy to share your memories.

Send flowers to the Gordinear family.