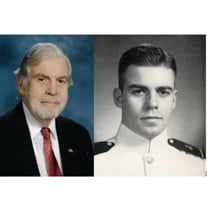 Commander (ret) James Carr passed away on 10 December 2020 in Melrose, FL. He was 89 years old. Jim was born in Winchester, Virginia, on 5 June 1931 to Rev Dr. James Carr and his wife Edith. Dr. Carr was the Pastor of the Berryville Presbyterian Church. Jim grew up in Berryville Virginia, Knoxville Tennessee, and Atlanta Georgia as his father gained increasing responsibility in the Presbyterian Church, first as a pastor and then as an officer in the church. While his childhood took him to several locations, he was proud of his family’s long lineage in Duplin County North Carolina, dating to the 1740s. Jim spent his early summers in Montreat North Carolina, where he made friends with many people he would later join as a member of the First Presbyterian Church in Gainesville. Following high school, Jim attended Emory University in Atlanta before receiving a Congressional appointment to the Naval Academy in 1951. At Annapolis he spent four years in the 16th Company with lifelong friends, where he was teased for his photographic memory. He could recall the score of any college football game in the last decade (he retained that skill for life) and every Kentucky Derby winner. It was joked that he passed all his courses without ever cracking a book. Upon graduation from the Naval Academy in 1955, he married his sweetheart Janet Abbott, from Rye New York. They raised five children. He was designated a Navy Intelligence Officer, and immediately assigned within the Pentagon. He was a briefer for Admirals Arleigh Burke, Hyman Rickover, Tom Moorer and other Navy leaders. In maturity, he enjoyed sharing stories about these legendary leaders. A globetrotter, he was assigned intelligence duties in Morocco, Japan, and Puerto Rico. He served two tours in the Vietnam War, as the intelligence officer for the Mekong Delta Riverine Force. He also worked with North American Defense Command inside the Cheyenne Mountain complex. As Assistant US Naval Attache to Indonesia during “the time of living dangerously,” Jim and Janet spoke Indonesian fluently. They developed personal friendships with the Indonesian Chief of Navy Staff, other naval leaders, and diplomats from many other embassies. It was a critical and interesting time in Indonesian and Cold War history, and Jim retained these friendships for decades. The head of Naval Intelligence cited Jim and his wife as “the most productive attache couple in the U.S. Navy.” In retirement, Jim lived in Golden Colorado, Arlington Virginia, and Atlanta Georgia, while pursuing business opportunities in mineral and petroleum exploration. He finally retired in a beautiful lakefront home in Melrose Florida. He loved the peaceful setting, the historic town, and the friendliness of his neighbors. He was an active participant in the Melrose Bay Property Owners Association, the Melrose Historic Society, and the Matheson Historic Center, serving on the boards of those organizations. He loved his church and his family. He was well known in the community for walking his dog Mackey daily in the park, befriending many neighbors; and for delivering flowers from his garden to the ladies of Melrose and the First Presbyterian Church. Jim, known as Bapak to his grandchildren, passed away near family and friends in his beloved Melrose. He was predeceased by his daughter Susan Abbott Carr in 1963 and his first wife Janet Abbott Carr in 1996. He is survived by his second wife Mary Bishop Carr, his four children James M Carr III, Carin Janet Carr, Kimberly Kauffman Carr and Arthur Warren Carr, eight grandchildren and seven great-grandchildren. He was beloved by his family and friends, who will remember his kindness, his patriotism, and his devotion. Due to the COVID environment, memorial services will be limited to an intimate family graveside event out of state.

Commander (ret) James Carr passed away on 10 December 2020 in Melrose, FL. He was 89 years old. Jim was born in Winchester, Virginia, on 5 June 1931 to Rev Dr. James Carr and his wife Edith. Dr. Carr was the Pastor of the Berryville Presbyterian... View Obituary & Service Information

The family of James McLeod Carr, Jr. created this Life Tributes page to make it easy to share your memories.

Send flowers to the Carr, family.