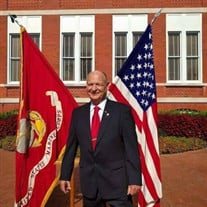 Maj. Jackie W. Patton, Sr., Retired, 76, a longtime resident of the Alachua, Florida area, died Friday, September 24, 2021, in the North Florida Regional Medical Center, Gainesville, following a recent illness. Maj. Patton was born on December 15, 1944, in Decatur, Alabama to the late Horace and Henrietta Patton. At a young age, he moved to the Alachua area, and graduated from Santa Fe High School, Class of 1963; he attended the University of Florida and then went to U. S. Army Officer Candidate School at Ft. Sill, OK, graduating in 1967. He had a long career in the Army, serving in posts all around the world, including in Germany, Vietnam, and Korea. He earned several medals, his airborne wings, and after 22 years retired with the rank of Major. While in the Army Jack graduated from Cameron University in Lawton, Oklahoma with his business degree. After the Army, he owned an auto dealership and had a 25-year career as a Real Estate Broker. Jack was an active member of Forest Grove Baptist Church in Alachua, serving as a deacon, a worship leader, and managed computer technology and more. He was a cheerful giver, enjoyed going on mission trips to North and South America, traveling with his wife, and most importantly, spending time with his family. He is survived by his wife of 55 years, Loye Patton; two sons, Jackie W. (Carrie) Patton, Jr., and Andy (Wendy) Patton; four grandchildren, Clayton (Laurin) Patton, Emily (Josh) Whalen, Hunter Patton, and Lauren Patton; a great-grandchild, Waylon Patton; three brothers, James (Ginny) Patton, Jerry Patton, and Dale (Connie) Patton; three sisters, Dorothy Martin, Carolyn Brooks, and Wanda (Andy) Walden. He was preceded in death by one brother Johnnie Patton and by one sister, Betty Brewer. Funeral services will be held on Thursday, September 30, 2021, at 11:00 A. M., in the Forest Grove Baptist Church, with Pastor Tony Clubb, officiating. The family will receive friends for one hour prior to the service at the church, beginning at 10:00 A. M. Burial services with full military honors will be held on Friday, October 1, 2021, at 1:30 P. M., in Florida National Cemetery, Bushnell, Florida. In lieu of flowers, please make donations to the Forest Grove Baptist Church, 22575 NW 94th Avenue, Alachua, FL 32615. (www.forestgrovebaptistchurch.org)

The family of Maj. Jackie W. Patton Sr. created this Life Tributes page to make it easy to share your memories.

Send flowers to the Patton family.