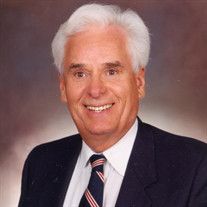 Rev. Jack Deaton Jack Deaton was born February 24, 1931 in Altro, KY, to parents Charles and Nora Deaton. He died April 11, 2020 in Gainesville, FL. Suffering from 11 years of Alzheimer’s. His parents moved to Middletown, OH shortly after he was born, where Jack grew up. He had “12 years of perfect attendance” through school, as he liked to remind people about his good health. He had a beautiful, perfect-pitch tenor voice, eventually joining the local barbershoppers wherever he lived, which he continued for over 50 years. After graduating from Monroe High School, Jack attended the University of Miami (Middletown) until he was drafted into the Army. He served at Fort Knox becoming a tank gunnery instructor until no more recruits were coming through. He was then shipped to Korea. While there, he was promoted to tank commander due to his skill in tank gunnery. While there he formed a quartette which often was “invited” to perform for high ranking officers at their various socials. Upon return to civilian life, he met and married his first wife Patsy. He worked for ARMCO Steel Co. in Middletown. Eventually he recognized the need for a preventive maintenance program for the company’s diesel locomotive system. As a result, he developed a comprehensive training program saving millions of dollars for the company. He retired from A-K Steel Co. in 1984. Jack is survived by his three children, Debra (Bob) Wells, Chuck, and Jennifer (Jim)Reagan; four grands, Morgan Deaton and Trevor Deaton, Leigha (Adam) Blevins and their son Logan, and Stacy (Greg) Plunkett and their two sons Camdyn and Bennett. Two siblings also survive. Gerry Gunderson and Linda Webb, and many nephews and cousins, all in Ohio. He is also survived by his wife of 35 years, Ruth; her son, Joe (Debra) Faulkner; grandson, Jonathan (Allyson) and their son Grayson, of Alachua; granddaughter, Jolyn (Andrew) Caddell and their daughter Ellorie of San Antonio. Jack at one time served as choir director in five various church denominations over the years. While driving to one of the churches he heard an inspiring ‘radio minute’ by a Cincinnati minister. After contacting that minister, Jack resigned as choir director, starting his classwork in the Religious Science philosophy. He became a Licensed Religious Science Practitioner. Upon the resignation of the Cincinnati minister, Jack was invited by the church trustees to fill in as a Sunday guest speaker. The United Church of Religious Science, headquartered in Los Angeles, had several open pulpits throughout the country and was developing a special intensive ministerial training course to be held in California. Jack was invited to participate, eventually earning his ministerial recognition, subsequently being ordained in 1976. By this time his ministry was in Dayton. His ministerial service totaled 35 years. He and his wife, Rev. Dr. Ruth, co-ministered several churches throughout the country until retiring and moving to Florida in 2010. A Celebration of Life will be held at a later date in Ohio.

The family of Rev. Jack Deaton created this Life Tributes page to make it easy to share your memories.

Send flowers to the Deaton family.