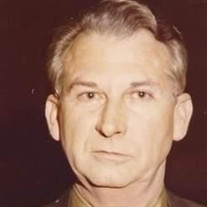 Mr. J. C. Lay, 92, resident of Gainesville, Florida, died suddenly on Tuesday, November 3, 2020, in the North Florida Regional Medical Center. Mr. Lay was born in Artemus, Kentucky on January 13, 1928 to the late Charlie and Cynthia Lay, and was raised in Hamilton, Ohio. After high school, Mr. Lay joined the U. S. Navy. After his military service ended, he stayed in Hawaii, working as a police officer for the Honolulu Police Department. While working as a police officer and playing guitar in a band he earned his bachelor’s degree. He then went on to earn his juris doctorate from Wayne State University. Upon graduation and passing the bar, he began working for The Hartford as a corporate lawyer, spending many years at the home office in Hartford, CT, eventually retiring in 1992. Soon after he moved to Florida, where he was able to enjoy playing golf almost daily. Mr. Lay also enjoyed bowling, judo, playing cards, and was an avid reader. He was always very active in his church and was a member of the University City Church of Christ. He was preceded in death by his brothers, John, Roy, Cecil, and Charles. Mr. Lay is survived by his wife of 53 years, Glennon Kay Lay; one daughter, Shelley and her husband Wester Henderson, all of Gainesville; one son, Jason and his wife Jackie Lay, of Washington, DC; one sister, Geneva and her husband Donald Moore, of Hamilton, OH; a sister-in-law, Edna Lay, of Tampa area; and by five grandchildren, Andrew Meier, Julius Lay, and Taylor, Alex and Jacob Henderson. Mr. Lay will be laid to rest privately, and the family would ask that any donations be made to the Humane Society of North Central Florida, 4205 NW 6th Street, Gainesville, FL 32609.

The family of J. C. Lay created this Life Tributes page to make it easy to share your memories.

Send flowers to the Lay family.