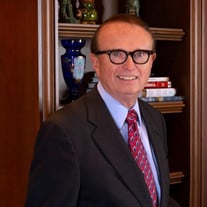 On Wednesday, July 14, 2021, Dr. Irvin N. Gleim, peacefully passed away with his family at his side at the age of 78. Dr. Gleim was born on November 6, 1942, in Milwaukee, WI, to Dr. William and Karin Gleim and was raised in the suburbs of Chicago, IL. He received all his accounting degrees (B.S., M.S., and PhD) from the University of Illinois Urbana-Champaign. He began his college teaching career at Pittsburgh State University in 1966 and then moved to Illinois State University in 1968. Dr. Gleim often would tell his peers in academia that he “didn’t need to die to go to heaven, he just joined the faculty at the Fisher School of Accounting in 1971.” He retired as a Full Professor at the Fisher School of Accounting at the University of Florida in 1988 and was appointed Professor Emeritus, making him the youngest Professor Emeritus at any AAU member university. The atrium of Gerson Hall at University of Florida is named in his honor. On May 9, 1967, he married his best friend, A. Darlene Allen, and together they raised three children Larry, Lorie, and Garrett. In 1974, they founded Gleim Publications, writing the first self-study CPA review manual at their dining room table, and using their garage as the warehouse. The popularity of Gleim CPA review materials exceeded their expectations. Dr. Gleim later expanded his product line to include review courses for other accounting certification exams, such as the CMA, CIA, and EA designations. He has helped millions of accountants advance their careers. In 1980, he began writing aviation test preparation materials to help aspiring pilots earn their certifications. His aviation materials have been used by most civilian trained pilots at some point in their aviation careers. His materials helped so many pilots achieve their certifications that occasionally an airline pilot would see his name on the passenger manifest and ask him for an autograph. Dr. Gleim was a quintessential professor whose passion was to help students move onward and upward in their careers. He was very welcoming to anyone who sought his advice. He had an open-door policy, and it was not uncommon to find local entrepreneurs in his office asking for his business advice. Dr. Gleim thoroughly enjoyed running his business for the last 47 years where he had the privilege of working with many great team members that made it possible for him to achieve his mission of helping accounting and aviation candidates reach their potential. Dr. Gleim had a stellar career and received recognition and multiple awards for his many accomplishments, including the FAA’s Wilber Wright Award and the Lifetime Achievement Award in Education from the National Association of Black Accountants. Some of his other career distinctions have been testifying before Congress regarding best auditing practices and having the U.S. Supreme Court confirm an appellate court opinion that was based on his published research. When Dr. Gleim was not working, he was spending time with his children and grandchildren at Gator games, his local “farm,” or his property in Alaska. Irvin loved his family and considered himself to be one of the luckiest people in the world. He attributed his happiness and success to his wife, Darlene, who not only made him an over-achiever, but also their three children and seven grandchildren. It was in Alaska, with his family at his side and the magnificent mountains he loved in the background, where he passed peacefully. He was preceded in death by his father, William, and his mother, Karin. He is survived by his wife Darlene; his three children, Larry, Lorie, and Garrett; his son-in-law, Steve Fuhr; daughter-in-law, Stacey; his grandchildren, Emily, Sara, Spencer, Anna, Lindsey, Preston, and Thomas; his sister, Kerstin; his brother, Holger; and many cousins, nieces, and nephews, all of whom he mentored and cherished. He was also blessed by the friends of his children who became “bonus children” and enriched his life in so many ways. A celebration of life will be held on Sunday, July 25, 2021, at the Grace at Fort Clarke United Methodist church on Newberry Road at 2 o’clock p.m. The service will be streamed live online at youtube.com/gracegnv/live. Donations may be sent to the Fisher School of Accounting, Faculty Fund, Attention: Alison Law at 100 Bryan Hall, P.O. Box 117150, Gainesville, FL, 32611

On Wednesday, July 14, 2021, Dr. Irvin N. Gleim, peacefully passed away with his family at his side at the age of 78. Dr. Gleim was born on November 6, 1942, in Milwaukee, WI, to Dr. William and Karin Gleim and was raised in the suburbs of... View Obituary & Service Information

The family of Dr. Irvin N. Gleim created this Life Tributes page to make it easy to share your memories.

Send flowers to the Gleim family.