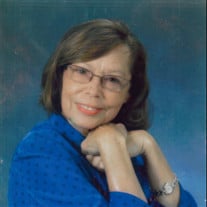 Elizabeth Idell Beckham 72, of Waldo, Florida, passed away on June 5, 2021. Idell was preceded in death by her husband Richard Beckham and her father Bobby Bryan. She is survived by her mother, Ruth Bryan, her son, Ricky (Rhonell) Wilkins, her brother, Steve (Kelly) Bryan, her nephews, Stevie and Michael Bryan, and her much loved granddaughters, Rikki Paige Wilkins and Randa Wilkins, and her great granddaughter Teagan Terrell. She was also blessed with many cousins. Idell was born in Gainesville, FL on April 28, 1949, to parents Bobby and Ruth Bryan. At a young age, Idell was diagnosed with osteomyelitis and as a result lost the heel bone on her right foot. Her determination to beat this debilitating illness served her throughout her life and helped her overcome many other health issues. Despite this injury, she put high heels on those feet 6 days a week and became the heart of Bobby’s Hideaway as Tinsel. The relationships she built with her “Hideaway girls” lasted her lifetime. Throughout the years, Tinsel brought laughter, great music, and fun times. She never forgot the people she met along the way. In 2004, Idell married Ricky Beckham and they embarked on a new adventure traveling while Ricky delivered goods. It was during this time they discovered the beautiful river rock that would lead to Hillbilly Rocks. Unfortunately, Idell’s kidneys were failing. After years of painful dialysis, Idell received a kidney transplant. It was Ricky’s care and guidance that insured her survival. I can only hope we are comforted by the fact they are together again. May you rest in eternal peace. You are much loved and so missed. Funeral Services will be held Saturday, June 12, 2021, 11:00 a.m. at WILLIAMS-THOMAS FUNERAL HOME HAWTHORNE, US 301 S. at Lake Ave. The family will receive friends one hour prior to the service beginning at 10:00 a.m. Burial will follow at Providence United Methodist Church Cemetery, County Rd 1474, in Windsor.

Elizabeth Idell Beckham 72, of Waldo, Florida, passed away on June 5, 2021. Idell was preceded in death by her husband Richard Beckham and her father Bobby Bryan. She is survived by her mother, Ruth Bryan, her son, Ricky (Rhonell) Wilkins, her... View Obituary & Service Information

The family of Idell Beckham created this Life Tributes page to make it easy to share your memories.

Elizabeth Idell Beckham 72, of Waldo, Florida, passed away on...

Send flowers to the Beckham family.