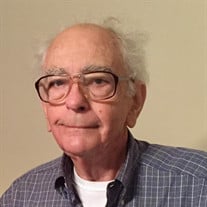 Herbert Stirewalt Pressly died peacefully on August 11, surrounded by family, in Gainesville, Florida. He was 85. Born March 8, 1935 in Tampa, Herb lived his entire life in his beloved Florida, ever ready to “take a drive” to the soft sands and warm waters of the Gulf. Herb was the son of Palmer William Pressly – an electrical engineer who operated the Tampa Tribune printing press; and Sadie Dembroge Pressly – an Italian beauty from California. He inherited his father’s passion for engineering and, in his 38 years as a civil engineer with the Florida Department of Transportation (FDOT), he became one of its trailblazers in the area of Computer Aided Design (CAD). These trails are now among the most travelled roads and bridges in the Sunshine State. Herb channeled the lightning-quick reflexes his father exhibited as a minor league baseball player and older brother, George, displayed on the North Carolina State basketball squad through his smooth style of tennis play: first, as a star at Tampa’s Hillsborough High School, then, as a club player at the University of Florida. Herb was crowned Bartow City Singles Champion in 1960. After graduating from Hillsborough in 1953, Herb proudly joined the Gator Nation, Class of 1958. As a member of the Army ROTC at Florida, Captain Pressly, then, served in the Army Reserves until 1969. Although they lived near one another in Tampa, Herb did not meet his future bride, Joyce Ann Mapstone, until the successful machinations of a blind date. They married in 1959. Together, they raised three children the hard way: investing tremendous amounts of love, time, attention, discipline, and making many sacrifices. Herb designed roads, and he loved to drive them. The Pressly Family vacation circuit included almost every state in the Union, including two extended trips “out west’” in the family station wagon, as well as annual trips to Gatlinburg, TN, and quarterly visits to Clearwater Beach. Opening Day at Disney World in 1971 was a special memory, inspiring a family love affair with this iconic piece of Americana. And, of course, countless last minute drives to Atlanta to cheer on the hapless Braves of the 70s. Sports were an integral part of family life, and Herb was present each time his daughters cheered or his son played. Professionally, Herb rose to the top of the booming world of computer-aided civil engineering techniques. His archives of hand-rendered drawings exemplify a mastery of the complex process of “building roads.” However, he was able to seamlessly transition to the new era of jumbo, water-cooled computers of the early 1960s. He was selected National President of the Highway Engineering Exchange Program in 1972 (greeting celebrity guest Mickey Rooney!) and was a longtime active member of the Florida Engineering Society and Florida Board of Professional Engineers. Following his retirement from the FDOT in 1997, Herb worked with CSI Software, Inc., a provider of customized application services. Herb honed his skills as an international metal detector through annual trips to Norwich, England over the final decade of his life. His bounty of ancient coins will be cherished forever. He also enjoyed gardening, grilling “world famous barbeque chicken,” western lore, woodworking, and, of course, following the Florida Gators, “in all kinds of weather.” With eight grandchildren at hand, Herb also easily made the transition to “Pappy.” He was beloved as a kind-hearted, story–telling role model of gentleness and forbearance. He was eventually known simply, and so appropriately, as “Sweet Pappy.” And, oh, how he will be missed! Herb is survived by his wife of 61 years, Joyce Mapstone Pressly; children: Amy Durham (David), Juliann Kovan (Brad, predeceased), and Scott Pressly (Barbie.); grandchildren: Julia (David Goehring), Douglas, Teresa, and Nicholas Durham; Abby Kovan; Carden, K.J., Palmer Pressly; brother, George Pressly (Betty.) The family will receive friends Saturday, August 15, 2020 from 11:00 a.m. to 12:00 p.m. in the chapel of WILLIAMS-THOMAS FUNERAL HOME WESTAREA, 823 NW 143rd Street CR 241 North, Gainesville/Newberry, FL 32669. The funeral service will begin at 12:00 p.m. A graveside service will be held Sunday, August 16, 2020 at 1:00 p.m. Culley’s MeadowWood Memorial Park, 700 Timberlane Road, Tallahassee, Florida 32312. In lieu of flowers, memorial contributions may be made to the Herbert Wertheim College of Engineering for the benefit of Minority Engineering Students. Please make checks out to: UF Foundation and indicate “In Memory of Herbert Pressly”. Mail Checks to: UF Foundation, P.O. Box 14425, Gainesville, FL 32604, Attention: Ann Powers

Herbert Stirewalt Pressly died peacefully on August 11, surrounded by family, in Gainesville, Florida. He was 85. Born March 8, 1935 in Tampa, Herb lived his entire life in his beloved Florida, ever ready to &#8220;take a drive&#8221; to the... View Obituary & Service Information

The family of Herbert Stirewalt Pressly created this Life Tributes page to make it easy to share your memories.

Send flowers to the Pressly family.